Fish recipes: the goodness of the deep with an Asian twist 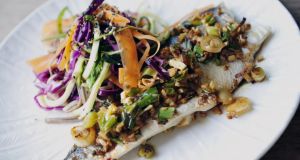 Ireland’s fertile seas positively teem with the little fellas, yet for various reasons, Irish people generally aren’t too keen on fish, though things have vastly improved in the last few years.

I reckon this suspicion of all things fishy is rooted partly in our Catholic history and the old edict to eat fish on Fridays, which over decades caused fish to become the poor relation of meat.

And then there is all that hoo-ha about the “fishy” smell. Well, just like meat, fresh fish should not smell of anything in particular – just of the sea. If it’s whole, the eyes should be clear and bright, not opaque (a sure sign it’s past its best) and its skin gleaming and smooth.

But I reckon the real reason most people can be wary about cooking fish is they often don’t know what to do with it and, for my generation anyway, this is probably because our parents (over)cooked the bejaysus out of it, to the point where it was dry, dull and distinctly unappetising. Euw.

If for no other reason, though, we should eat fish because when it’s cooked properly, it’s bloomin’ delicious, and is often lower in calories (and easier to digest) than, say, red meat.

We’re all told to eat oily fish – salmon, mackerel, herrings, sardines, trout – at least once a week, to take advantage of its Omega-3 oils, which are said to protect against cardiovascular disease, age-related vision loss and dementia.

But white fish, too, is good for you, and like oily fish, is a good source of niacin, vitamin B6, vitamin B12, phosphorus, selenium and protein. And one of the nicest types of white fish – and it’s reasonably priced – is seabass. It’s less “meaty” than, say, cod or hake, but not so delicate that it can’t take some robust flavours.

This is why you so often find it on Asian menus, and it is Asian flavours that inspired the first recipe here – for seabass with ginger, tamari, sesame and spring onions. This is the best kind of rapid-assembly, one-stop-shop cooking because you just bung it in the oven for 15 minutes or so.

And to go with it is a crowd-pleaser salad – also Asia-inspired – full of raw food and packed with nutrients. The key is to let the grated cabbage “wilt” for a while first in the olive oil, salt and lime juice before adding the other ingredients and tossing them in the dressing. This would also be lovely with salmon.