Roberta's - run by the Press Up Entertainment Group, which owns the Dean Hotel - opens next week, with a large food hall, casual eatery and steakhouse to follow 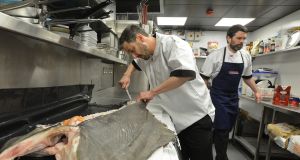 I’m standing next to a large, rectangular concrete-topped bar, flooded by natural light from a steel atrium overhead, in the heart of a new restaurant space. The tables and chairs have arrived but there’s no point in taking off the dust covers just yet because the marble floor tiles are still being fitted by hand. Walls have been knocked down to expose brickwork and to let the light flood through windows overlooking Grattan Bridge on the Liffey, straight through to the facing windows on Essex Street, one one of the nicer parts of Temple Bar. A wood-fired pizza oven is being slowly brought up to a roaring temperature, its fire lit in anticipation for the first diners. It’s not a building site, but the finishing touches are yet to be applied. This is Roberta’s, Dublin’s newest restaurant, which opens next week.

I’ve never seen a restaurant at this stage of development before, I say to Ben Barclay, head of operations for owners the Press Up Group, and Troy Watson, head chef of Roberta’s. “We’ve seen a few like this,” says Barclay, with a knowing laugh. This is not their first rodeo.

Roberta’s is the latest offering of Press Up Entertainment Group, Paddy McKillen Jnr and Matt Ryan’s hospitality juggernaut. Press Up has been on the go for a decade now and its portfolio includes the Dean Hotel, Sophie’s at the Dean, Angelina’s, WowBurger, Peruke & Periwig, the Liquor Rooms and quite a few more of the capital’s buzziest meeting spots. Its growth shows no sign of slowing and, on the contrary, it seems that it is gathering speed. The group recently acquired Howl At The Moon pub and hope to develop it into a boutique hotel, pending planning. Meanwhile, in the leafy Dublin suburb of Ranelagh, another boutique hotel is already in the works and is due to open early next year. But before all that comes Roberta’s.

In February of this year, some of the core management team at Press Up, including Watson, Barclay and head of marketing and PR Aoife Kelly, went on a tasting trip to Chicago, Boston and New York as a recce for Roberta’s.

“The main thing,” Kelly says, “is to grow the business of customer service and food in Ireland to make it as good as what you’d find in New York or LA. Irish people deserve places in Dublin that are as cosmopolitan as you’d find in any other city.”

As we talk about the Irish art in the Dean (45 pieces by Irish artists hang on the hotel’s walls), a couple of movers appear in Roberta’s, carefully escorting a large canvas to be hung in its new home. Art from Irish artists Richard Gorman, Philip Allen, Eoin McHugh, Mark Francis and Jan Pleitner will all hang on the walls here.

The menu will include dishes such as Iberico Secreto pork seared on Roberta’s grill with braised fennel. There’ll be braised beef pot stickers and wood-fired duck hearts, inspired by the culinary explorations of that US trip. The plan is to satisfy more adventurous eaters (hence the duck hearts) while not alienating those who prefer less out-there dishes, an often tricky line. Head chef Watson, who is originally from Melbourne and has previously worked in Fade Street Social and Rustic Stone, has developed a pizza menu and there’ll be stalwarts such as seafood linguine on offer as well.

There’s an even bigger story behind this first-floor development. This 220-seater restaurant is merely the first phase in an impressively ambitious project. The second phase of this Wellington Quay building’s development will herald the arrival of Dollard & Co, a ground floor food hall and casual dining restaurant below Roberta’s.

Dollard & Co will be a food market and restaurant, complete with a butcher and seafood counter, a dry-ageing chamber for cured meats, a cheese counter, a wine shop, coffee from local roasters Two Fifty Squared, and Dollard & Co-branded take-home meals. In the centre of the food market, there’ll be a large rectangular space with seating for 80 people. On one side of the rectangle, there’ll be a deli, and on the other there’ll be a grill area flanked by a bar with seating for another 40 people. There’ll also be another wood-fired pizza oven in the corner, with a hatch opening on to Wellington Quay for take-away slices. Phase three of the whole project will be a steakhouse in the basement of the building.

Dollard & Co is on course to open its doors in June. But until May 19th, getting Roberta’s over the line will be the team’s immediate focus. “We’ll be inviting friends and family to come in and try it out before we open,” explains Barclay. “We’ve made the mistake in the past of having our first customers coming in through one door while the builders left through another door. Feeding 500 people before we even open the doors for dinner will help us build our confidence. Then we’ll be ready for opening night.”

Roberta’s opens on May 19th robertas.ie

Ask the Expert: Nine-year-old son still sleeps in my bed