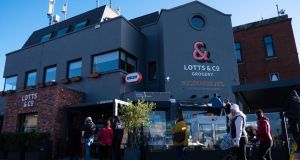 A queue outside the new Lotts & Co on Clontarf seafront. It will have a a full service foodhall, with delicatessen, rotisserie, greengrocer, butcher and fishmonger

Less than 24 hours to go before Lotts & Co opens its new gourmet grocery store at 46 Clontarf Road, Dublin 3, and it’s all go, with the team busy getting set to open its doors on Friday at 8am. Outside, a signwriter is busy up a ladder finishing the retro handpainted storefront name, and inside is a hive of activity as staff stack the metal grid shelving with a gorgeous selection of jars, packets and tins, from Swedish chocolate to Italian passata to a range of sauces.

There’s a palpable air of anticipation as it comes together.

Opening a new business on Friday 13th sounds daring at the best of times, never mind in a pandemic, but Barry McNerney reckons it’s perfect timing, so they’ll be well established before Christmas. Besides, he and his brother Paul and their business partner John Byrne have opened all their businesses – including the original Lotts & Co in Beggars Bush, Dublin 4, which they opened in 2015, and Juniors and Paulie’s restaurants – on a Friday.

The second branch of Lotts & Co is a 5,000sq ft premises and brings to Dublin’s northside a full service foodhall, with delicatessen, rotisserie, greengrocer, butcher and fishmonger.

Behind the long refrigerated counter, staff are adjusting the coffee machine for the new house roast from Cloud Picker, and stocking the impressive range of cheeses (“as much as we can pack in,” says regional manager Rory English, who’s been supervising the set-up), alongside what will be the deli, salad and cake counters. At the end of the shop, the FX Buckley concession butcher’s counter is setting up; Buckley will supply both meat and fish, and veg will be Irish where possible, with the addition of “specialities you won’t see anywhere else”, according to McNerney.

For those familiar with their Beggar’s Bush shop, this one is a “cut and paste”, says English, who talks about setting and maintaining a consistent standard. “People like what we’re peddling,” says Barry McNerney.

Paul McNerney – a trained chef – who’s been working hard preparing the rotisserie area, comes over to show us a joint of Wagyu beef flown in from Japan (this large piece is worth around €1,000 he reckons; FX Buckley will be subdividing it into 200gm pieces for two portions, at €50 a pop). Flying in the Wagyu is a novelty (they also stock west Cork Wagyu), and most of the meat and other produce is more everyday and attainable.

Outside, partially under an electric pergola from Italy, will be the fruit and veg area – aiming to recreate a market feel – as well as flowers, herbs and a banana tree (for display, not growing).

The McNerneys and Byrne saw off interest from several other parties, reputedly including the Press Up group, to secure the premises, which previously operated as The Food Rooms deli and coffeeshop, which closed in March. “I found it when I was out cycling, in the beautiful weather during the first lockdown,” Barry McNerney says.

The trio invested €600,000 in the project, which will employ more than 40 people, between shop and kitchen.

The shop floor in Clontarf is roughly the same size as the Beggars Bush branch, and there’s also a large kitchen space is for creating ready-to-eat food for both branches, while ready-to-heat dishes for both will continue to be made at a production kitchen in Donnybrook.

McNerney forsees an expansion of the cake and patisserie range coming out of the Clontarf kitchen, along with more pickling and fermenting. Breads will continue to be supplied by Bread 41 and Bretzel Bakery, and as well as the house roast coffee they’re stocking six or seven Irish roasters, including Upside nearby in Clontarf. Customers can slice bread or have beans ground on the spot.

They aim to recreate the feel of a local grocery; known for having an extensive range of the best Irish artisan food products available, McNerney describes the Lotts & Co offering as “all the best small, local suppliers under one roof”.

The in-store rotisserie will supply porchetta, beef, lamb and and chicken to the deli counter for lunchtime sandwiches, as well as offering chickens and cuts of roast meats to go, “with the potatoes roasting underneath, in the European rotisserie style”.

There’s been great anticipation locally as they’ve geared up for opening, they say, and they hope for good business from locals, transient trade, cyclists and walkers along the Clontarf seafront – and office workers when real life returns.

Starting off during a pandemic may seem counterintuitive, but Barney Mcnerney says “It’s the best time to open a business”, having opened Juniors during the last recession. “Things are cheaper, lots of people are looking for work. We are of the moment – supporting local and small producers” which people are very aware of right now, but which is also something “which we have always done”.