Mixing it with aplomb at Irish Bartender of the Year competition 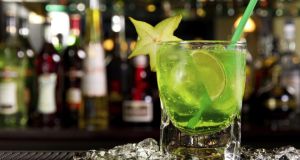 Adam Walsh is working hard to practice his cocktail-making skills ahead of next Tuesday’s Irish Bartender of the Year final run by Diageo. At 22, he’s the youngest of six Irish finalists to have made it through a series of qualifying heats but fears his age might work against him in the brand knowledge section.

He needn’t worry too much though – his maturity shines through. A bartender at Soder&Ko, a Scandinavian-themed bar on South Great Georges Street known for its nordic cool and great cocktails, his winning cocktail entry in heats earlier this year was a lesson in sophisticated thinking. Taking his inspiration from the character of Daisy in The Great Gatsby, it was called Beautiful Little Fools. A gin-based cocktail, he blended Tanquery 10 with standard Tanquery infused with violet leaves, violet flowers, vanilla, lemon juice, maraschino, rhubarb bitters and honey. He allowed it to settle in a whiskey barrel and then served it up in mini watering cans fulfilling a judging requirement to inject an outdoor theme into the recipe.

Finding and championing talent behind the bar is the central idea driving Diageo’s World Class Irish Bartender of the Year competition, considered to be one of the toughest and most prestigious bartender/mixology awards around.

The other five finalists also have strong pedigrees and the bars they represent are some of the best cocktail venues in the land. The only woman in the competition, Anna Walsh, from Cork, works in the ultra cool and minimalist MVP (Minimal. Viable. Pub.) on Upper Clanbrassil Street. Dog-friendly and with a fantastic cocktail menu it markets itself as “A pub. No fuss.”.

Darren Geraghty from Clondalkin in Dublin holds court in the Candlelight Bar at Siam Thai, an upscale cocktail bar in Dundrum.

Ken Herily from Co Clare is bar manager in House on Leeson Street, the club like venue that has stolen the crown on this infamous nightlife street.

Mark Gil R Velasquez who works at the five-star Merchant hotel in Belfast is originally from the Philippines. Shane Nolan, a fine art graduate, works in SoHO on Grand Parade in Cork.

Next Tuesday, all six will assemble in Dublin for a last round of testing. They will be presented with a full day’s worth of challenges, designed to test their skill and knowledge and, crucially, their ability to create a perfect round of drinks.

The winner will represent Ireland at the world final in South Africa in August. It’s been a few years since Ireland participated in the competition and Orla Brandon of Diageo, whilst acknowledging an Irish bias, says the standards displayed by the Irish finalists this year put the country in a strong place to take the title. But meanwhile, being named Irish bartender of the year is a title well worth winning all on its own.