Hazy and clear: Four IPAs to try for the weekend 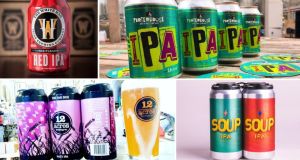 Soup, I recently discovered, is a pretty divisive subject. Do you eat or drink it? Depends on the thickness, goes one argument, or whether you have it in a mug or a bowl. Or if there are lumps in it. Does it count as a meal? Yes, according to Jerry in a famous episode of Seinfeld. Though some say it’s just a starter.

You won’t need a spoon to try Soup IPA, however, which is made by the Garage Beer Co, in Barcelona. Although the ale’s name, and its association with steaming bowls of goodness, might suggest the opposite of what you have in mind (fruity, hoppy, refreshing?) when choosing a beer for the weekend.

The name also makes a strong nod to the craft-beer world’s obsession with haziness and the excessive amounts of yeast particles and hop chunks that can be found in some beers – though not in this one.

True to the New England IPA style, Soup IPA (6 per cent) has a soft mouthfeel, a hazy body, lots of tropical-fruit juiciness and a restrained bitterness – and it comes in retro-style green-and-red 440ml cans.

Another hazy beer on the shelves – and worth seeking out – is the Far Side, by 12 Acres Brewing, in Co Laois. This is a tasty and fruity 5.1 per cent IPA with a smooth, clean body and a balanced bitterness.

Porterhouse Brew Co’s Yippy IPA is 5 per cent alcohol, comes in 330ml cans and pours clear. This beer is a little more like a session IPA – overall, it’s quite easy-going, with a pared-back bitterness – but leans towards the more old-school IPA flavours of pine and citrus.

White Hag’s Fleadh Red IPA is a bigger beer, at 6.8 per cent alcohol. This has a rich and malty body, with lots of hoppy freshness and a lovely touch of strawberry.