Drink in a poetic tale of winemaking 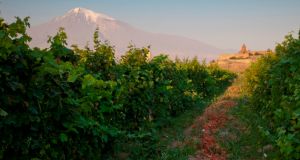 The first evidence of viticulture can be found in Transcaucasia, encompassing eastern Turkey, Azerbaijan, Georgia and Armenia. Yet we rarely come across wines from these parts.

I was therefore intrigued to come across an Armenian wine, along with its maker, Zorik Gharibian, at a tasting. My first attempt to interview him was unsuccessful as he was off climbing Mount Ararat, (where, according to the Bible, Noah planted the first vineyard), where he launched to his newest wine.

Gharibian was born in Iran, but fled at the age of 14, after the revolution. Educated in the Armenian school in Venice, he later set up a fashion business in Milan, where he now lives.

Founded as a state as far back as the 6th century BC, Armenia has suffered invasion by the Ottomans, Persians and, more recently, Russians. After a brief period of independence in 1918, it was incorporated into the Soviet Union. When it finally broke away in 1991, Gharibian was determined to do something to help out his mother country. Emigration, always a problem, had increased dramatically, with estimates that up to 25 per cent of its population may have left since independence.

“I went for the very first time in 1998,” explains Gharibian. “As part of the diaspora who had grown up with a strong Armenian identity, it was a very emotional experience. In the fashion world, a lot of companies were looking to outsource their production to eastern Europe where labour was cheaper, so I thought why not Armenia? We reinstated an ex-Soviet factory that had been lying idle and produced clothing. I travelled a great deal to Armenia and became aware of a lost wine culture, and so the idea of making wine began.”

The vine Vitis Vinifera, ancient ancestor of all our current wine grape varieties, was established in Transcaucasia a million years ago. According to Gharibian, 8th century scholars called Armenia “the land of vineyards”, while Greek writers also commented favourably on the wines. Recently, an archeological dig found a 6,000-year-old winery (the oldest ever discovered) a few hundred metres from where Gharibian eventually founded his own winery. “I might be the new kid on the block,” jokes Gharibian, “but my neighbour is 6,000 years old.”

Setting up a vineyard in Armenia was not easy. “Finding land was a challenge,” says Gharibian. “I wanted to start from scratch with one large plot that had never been cultivated. This was difficult as most land had been divided into small lots between villagers and these were their livelihood. Eventually I found some land in Rind that had never been cultivated because there was no available water. I discovered that the World Bank was building a pipeline to the area. In the early years there was a basic lack of everything, including roads and infrastructure.”

The vineyard was planted at 1,400 metres in what Gharibian calls “the purest most isolated region in the most remote country”. They used local grape varieties unheard of elsewhere, found in several very old local abandoned vineyards, including a 12th century monastery that had been closed in the Soviet era. Because they are so remote and the soils are sandy, Phylloxera had never reached the area. As a result, all of the vines are ungrafted.

Gharibian adopted a very traditional approach to his winemaking (he is assisted by two Italian consultants). This includes clay amphorae, used in the region for millennia. “2010 was our first vintage. We are abandoning stainless steel and moving towards plain concrete, amphorae and big oak casks – this is the future for us. We have our own unique grape varieties, ungrafted vines and our native yeasts.”

There is only one wine available now, with two more in the pipeline. Karasí, the current release, is made from the Areni Noir grape and partially aged in clay amphorae sealed with wax and buried below ground.

“I have been overwhelmed by the support of the Armenian community, but I never wanted to make just a good ‘ethnic’ Armenian wine and sell it to Armenian restaurants. My ambition for Zorah is to make great wine and to introduce Armenia’s rich wine history and the treasure trove of Armenia’s indigenous varieties to a worldwide audience,” says Gharibian.

Armenia has four different wine-producing regions and more than 400 unique grape varieties. “There are large investments being made and better quality wines are beginning to emerge, but these are industries with a focus on mass distribution. I am very romantic in my approach and they are very technical. If Armenia is to succeed it will need wines made by poets and not architects,” he says.