‘In rural Ireland, when the beer is good, you don’t have to explain anything’ 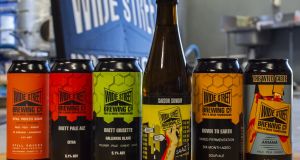 A winemaker will shudder at the mere mention of the word Brettanomyces, while some brewers will smile broadly. “Brett” is a yeast that causes funky aromas and flavours, often described as sweaty saddles, earthy, or other far-less-kind terms by wine people. “Mixed-ferment” brewers, in Belgium and the US in particular, use it to add flavour and complexity.

Now Wide Street, based in Ballymahon, Co Longford, wants to bring us the wild world of mixed fermentation. Its house yeast is a blend of Brettanomyces, Saccharomyces and Lactobacillus strains from a yeast laboratory based in the US.

Wide Street’s owners are Carla Naltchayan and Séan Colohan. “I always did a lot of fermentation stuff, kimchi, kombucha and kefir – they are my passion projects – and Séan did home-brewing for five or six years before thinking about going commercial,” Naltchayan says.

They went to the Carnivale Brettanomyces festival in Amsterdam every year, building up knowledge and relationships with German and Belgian brewers and their beers. “It opened our eyes to a completely different world of beer, but the question was: ‘Is Ireland ready?’ ”

And is it? “We don’t know yet but you have to start somewhere. We have a core of followers who are really big fans – people who want something new. We are doing well locally. In rural Ireland when the beer is good, you don’t have to explain anything.”

They started the business in May 2019. “We got a great boost from The White Hag Festival in Sligo, with lots of positive interest, and then we got nationwide distribution, so we have achieved a lot in one year despite Covid.”

Naltchayan’s favourite beer is Diversion. “It is brewed as a traditional lager, and then we added our house culture for the secondary fermentation. It is unique, light and slightly tart; it comes close to a wine hybrid.”

I enjoy all of the Wide Street beers; they certainly are different, with a pronounced refreshing acidity, distinctive fruits and a bone-dry finish. My own favourite is Down to Earth Sour Ale.