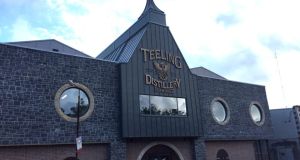 Tommy “Bang Bang” Dudley, one of Dublin’s best-loved characters, would probably be delighted to hear that the bar at the heart of the brand new Teeling Whiskey Distillery in Dublin 8 has been named after him.

His “Bang Bang” title came from a habit of travelling around the city shooting people with a make-believe gun.

Now, his role in stitching the fabric of Dublin together has been further strengthened as his former home in the Tenter’s in Dublin is part of the distillery itself. His house was one of the first buildings the Teeling family bought as they struggled to bring Dublin whiskey back to life, and as the Teeling phoenix rose in the inner city it incorporated Bang Bang’s house, now the control room of this beautiful distillery.

For now you can only reach Bang Bang’s bar by taking the distillery tour but there’s more than a few fingers crossed that that might change. And what a bar: with huge round windows flooding the room with light, beautiful wooden tasting bars and stunning cylindrical “pods”, it’s a whiskey taster’s dream.

It doesn’t shy away from the fact that this is a working distillery, taking industrial design and blending it perfectly with the 21st century. Concrete floors, bare wood, big open spaces and just a touch of leather to reflect the richness of the whiskey.

For €14 you get a 45-minute tour of the distillery and two drinks in the Bang Bang – a whiskey from the Teeling range plus a whiskey cocktail designed by the new Global Teeling Ambassador Kevin Hurley.

With a rooftop garden and time on your side, there’s a wonderful education to be had in this brand new slice of Dublin.

The Teeling Whiskey Distillery opens to the public on June 13th