There’s no bun involved here, instead an Asian-inspired chicken burger sits on a Portobello mushroom 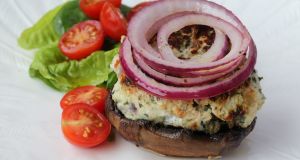 This recipe is great because with some chicken dishes, a breast each can seem mean. But with this one, the onions and herbs really stretch out the amount, so you will easily feed four as well as have a few leftover

Feeding a family or a group of people can be stressful at times, but when you have a picky eater or two to cater for, especially if it’s daily, it can ratchet your blood pressure up to a whole new level. Because no-onereally wants to cook more than one meal. Do that once too often, and you start to lose the plot.

But if there’s one word that seems to appease the masses when talking about what’s for dinner, it’s ‘burger’. It doesn’t matter a jot if it’s fish, vegetarian, chicken, lamb or beef, if I tantalise my lot with the thought of a burger of some kind, I know I’m on the home straight, if not quite home and dry.

Because all burgers are not the same, you see. Much depends on the main ingredient, with veggie burgers in particular often being hard to get right. But people can also be mighty particular about the toppings and trimmings they like – all those extras that make a burger something special.

On those rare occasions when I do opt for a classic beef burger, I like mine fairly simple; although I do find most buns get in the way. But you can never have enough pickles. Maybe it’s because I spent some of my teenage years working in the US, but I’m an all-American girl when it comes to burgers.

But I’m smart enough to know that others might have fancier tastes, so when I do serve up burgers, I like to offer a smorgasbord of trimmings to choose from so no-one feels shortchanged in the flavour stakes.

And because I can’t help myself, I keep experimenting – and not just with the trimmings, but with the burger itself. So this week’s recipe is for a chicken burger that instead of being a straight-up, no-frills grilled fillet, is made up of minced breast meat given something of an Asian twist with garlic, coriander and lemon, before being baked in the oven.

Super lean and healthy. The kids didn’t actually notice the coriander – which is a reviled ingredient as far as they are concerned – as I allowed a few blobs of mayonnaise. The chicken can be quite dry otherwise.

Instead of a bread bun, however, each burger is nestled into a roasted Portobello mushroom, made even meatier with a healthy dose of tamari.

And then there are the trimmings. While the burgers are cooking in the oven, you can marinate some very finely sliced red onion in a squeeze of lime and a lick of olive oil. Top the burger with that and some lettuce – avocado is good too – and Bob’s your uncle.

This recipe is great because with some chicken dishes, a breast each can seem mean. But with this one, the onions and herbs really stretch out the amount, so you will easily feed four as well as have a few leftover.