The idea of dinner often conjures up traditional images, but it can be good to get out of your comfort zones 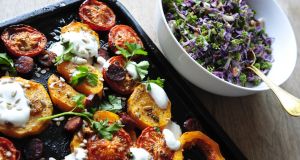 It can be quite liberating to let go of the idea of meat ‘n’ two veg or even the classic one-pot wonder. Photograph: Aidan Crawley

Dinner. What does it mean to you, exactly? I’ve been thinking about this for a while now, if only because many of my recipes don’t really fit the traditional criteria for dinner. The standard meat ‘n’ two veg they are not.

Historically, and for most of us, dinner is the most significant meal of the day, and precisely because of that, it needs to work hard to satisfy and nourish us. No mean feat I’d say, especially if your evenings are busy or you’re feeling tired.

So whether it’s a stew, meat ‘n’ two veg or something else entirely, we like to get dinner right, both for us and anyone else we’re feeding. And the easier it is to prepare, the better.

Which is why much of the food in this column doesn’t really follow dinner norms. And that’s because, more than anything, I want people to want to cook.

So my emphasis is on ease of preparation (or you won’t be that bothered, not during the week anyway), optimal nutritional content and balance, and, of course, flavour, because if it’s not tasty, you won’t want to eat it, never mind cook it again.

In fact, it can be quite liberating to let go of the idea of meat ‘n’ two veg or even the classic one-pot wonder – not that there’s anything wrong with either of those options, by the way.

I’m not saying you need to do it all the time, but every now and then it can be good to shove ourselves out of our comfort zone. In my experience, it can make you want to cook from scratch more often, and that can’t be a bad thing.

But old food ‘rules’ and traditions still come in mighty handy at times. Like in my first recipe, a fine example of the attractions of that classic combination – sweet and salty. The soothing sweetness of squash and tomatoes are here matched perfectly by feisty, salty chorizo.

If you are vegetarian or fancy Asian flavours instead, simply swap the chorizo and yoghurt for some wilted greens, a drizzle of sesame oil and a squeeze of lime and maybe some tamari or soy.

My second recipe turns a blank slate of cabbage and kale into a really moreish winter slaw that works well with the squash and tastes great the next day too.

I used the food processor to shred the lot, but if you use a knife, just make it as fine as you can without giving yourself repetitive strain injury.