Domini Kemp: Be good to yourself with this healthy treat

Satisfy your sweet tooth with this quick recipe for chocolate soldiers 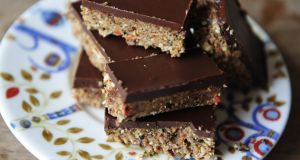 All the ingredients come from the store cupboard or fridge, and the whole lot is cooked in a single dish in less than 10 minutes. Photograph: Aidan Crawley

Ireland, like so many other countries in the West, has a problem with obesity and, like the weight some people so badly want to lose, we are finding this problem hard to shift. So, if you like your treat occasionally to take the form of food, what can you do to help you and yours?

I can speak only for myself and for those readers willing to share tips with me (thank you, by the way), but I find that one of the simplest ways to stop myself from eating too much or too often is to put as many obstacles as possible between me and the food I know I shouldn’t eat too much of.

One way to do this is to make this type of food less hopelessly, moreishly addictive. For sweet treats at least, this is simply (ha!) a question of cutting down drastically on sugar.

There are certain combinations of fat and salt that are just as addictive, which is why you won’t find crisps in my house – though I can’t guarantee the teenager doesn’t do it when we’re out of the house, but she’s 18 now, so that’s her business.

Making something less moreish became absolutely and immediately necessary recently when I came across a recipe for Chocolate Soldiers in my pal Susan Jane White’s new book, The Virtuous Tart. Oh. My. Goodness. I happily scoffed about half the batch before realising that the only way to stop myself eating the other half was to give it away. All of it.

Or at least, what was left of it. With some foods – for me anyway – moderation just isn’t possible it seems. When I am on the go, it is not a problem. But when I am working in front of the computer (like right now) and writing about food (danger, danger) then having anything too delicious, such as these chocolate soldiers, is hard to resist.

But I couldn’t forget how good they were, so I tried to make a version using prunes instead of dates and raisins. Dates are pretty high in sugar, prunes less so and they are both relatively squishy, so I thought I was on to a winner. They were awful. Truly a disaster.

So I made another version that is still dreamy but less addictive, with less maple syrup, and no raisins or tamari at all. I also added a little coconut oil to the chocolate as it makes it easier to spread. They are still full of goodness thanks to the seeds and berries and, even better, just like Susan’s version, they don’t require any cooking. Bless you Susan, and your wonderful book!

My second recipe embodies this approach very well. It’s appropriate that the translation for puttanesca is “tart” because this puttanesca sauce for fish is certainly what I would call “slovenly”.

All the ingredients come from the store cupboard or fridge, and the whole lot is cooked in a single dish in less than 10 minutes. This time of year, it’s nice to take a break and eat something a little lighter all round.

What do you do when you meet a bear on a walk? Copy this 12-year-old
4

Face masks: The definitive guide to when to wear them, how to wash them, and the chin tuck
Real news has value SUBSCRIBE