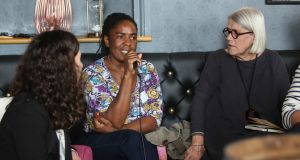 Blessing Moyo with chef Darina Allen at Athru, a conference in Galway on equality in food. Photograph: Martina Regan

Chefs Darina Allen and Jess Murphy have called on the Government to scrap the ban on cooking in direct provision centres. At Athrú, a conference in Galway on equality in food Allen called the ban barbaric. “It seems to be me another kind of torture we are inflicting on people who have already suffered so much,” she said. The ban “makes me ashamed to be Irish,” she said. “It’s a human rights issue happening on our watch.”

The call followed a contribution by Zimbabwean woman Blessing Moyo who has been living in Eglinton House, a former Salthill hotel which operates as a direct provision centre for asylum seekers for the last eight years. She said she had never been allowed to cook a meal for her three children. She was one of a number of African cooks who cooked at a pop-up meal in Galway earlier this year with the help of chef Jess Murphy, one of the organisers of today’s conference.

In January the Government responded to a private members bill recommending giving asylum seekers access to cooking facilities saying it was “not easy to implement in the short term” with rising numbers of asylum applications. The then Minister of State Aodhan O’Riordain said 15 of the 35 direct provision centres provide “access to a communal kitchen where residents can prepare their own meals”. He said four centres had their own “self-contained catering units for each family.”

Blessing Moyo said the ban on cooking was adding to the sense of dislocation. “We are raising a generation of people who feel like they don’t belong anywhere,” she said. Chef Jess Murphy said she had spoken to a boy on Pancake Tuesday who just wanted his mother to be able to cook pancakes for him like all his Irish friends could. “There needs to be a way to change that. We’re happy to help,” she said.

Earlier the conference heard chef Mary Farrell question why so few head chefs in Ireland were women. She said a major study found that restaurant reviewers in the US talked routinely about women’s food as homely or nurturing while admiring the technical prowess of male chefs. She said both women and men needed “better ways of working” than the long hours culture of restaurant kitchens which were hostile to family life.

Birgitta Curtin of the Burren Smokehouse said women were natural leaders as they see opportunities in everything, are excellent networkers and relationship specialists. “Women don’t quit,” she said.

Head of the Hotel School at GMIT Cait Noone said they had good gender balance among the 400 culinary arts students. She warned that while there were over 2,000 students studying culinary arts across the country applications were dropping off because of the negative impression that a life in cooking was extremely tough.