There are lots of food-related events around the country for Culture Night. We’ve rounded up some of the best 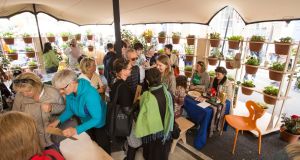 Get your party hat on and join a massive street party in Limerick. Photograph: Sean Curtin True Media.

If your culture of choice has a culinary flavour, you’re in luck. There is a veritable bounty of food-focussed events taking place across the country for Culture Night.

In Cork City, The English Market will be opening its doors a little later than usual, with free samples to pick up along the way from 6.30pm to 9pm. Cork Foyer in Blackpool, which provides safe and affordable accommodation, training and support for young adults aged 18 to 25 who were homeless or at the risk of becoming homeless, will be inviting visitors to tour its community garden from 6pm to 8pm. On the North Mall sits the Franciscan Well Brewpub, one of Ireland’s oldest micro-breweries, and it will be hosting talks and tastings about craft beer from 6pm to 9pm.

In Derry, The Tower Museum will host a Taste of the Past where visitors will be able to sample food from the 16th and 17th centuries while taking in live period re-enactments from 6.30pm to 8.30pm. The Walled City Brewery will be giving tours and tastings on the hour from 6pm to 10pm.

The Dublin Food Co-Op and The Fumbally Stables will both be open for visitors in the capital city heading to Dublin 8. The Dublin Food Co-op on New Market Square will be hosting a World Culture and Fusion Market focused on organic living as well as world cultures. There will be a film screening at 7pm of FareIreland, an Arabic Tea Tent, street food stalls featuring food from around the world, and live music from 9pm. Around the corner in The Fumbally Stables on Fumbally Lane will show visitors how to make Sauerkraut in their kitchen from 6pm to 8pm.

In Galway, join the Gort Men’s Shed group for a night around a Lazy Susan sampling food prepared by their Irish, Brazilian, Russian, Syrian and Polish friends and neighbours from 5pm to 8pm.

At Victoria Place in Galway, French restaurant Le Petit Pois will host an evening dedicated to arguably the best food film of all time, Babette’s Feast, including cheese and wine tastings followed by a screening of the Danish film between 4pm and 7pm.

On Eglinton Canal, the participatory arts and environment project Third Space Galway will host their (Perma) Culture Night on the Canal to celebrate the city’s new Permaculture Trail, featuring art, food and permaculture conversation from 6pm to 8pm.

In Athy, Co Kildare, The Women’s Integrated Network will host Cooking Up A Delicious Storm, a chance to showcase food and drinks from around the world with an added competitive edge. Cooks of all ages can put their dishes forward by booking in advance and cooking up a storm on the night between 6pm and 8pm (pre-booking is essential via culturenight.ie).

Nearby in Naas, Lara and Hong Wei Shi will host a Chinese Tea Ceremony in Book & Cup at Barker & Jones from 5pm to 8pm, in collaboration with Connect Community, an intercultural and intergenerational community group.

Limerick’s Milk Market will play host to Pigtown, with Pig Talks, Pig Parade Walks and Pig Pottery Making for all ages between 5pm and 8pm. On Collins Avenue, The Urban Food Co-Op celebrate their first birthday on Culture Night from 5pm to 7pm. In Ormston House Cultural Resource Centre on Bedford Row will host the World Recipe Exchange to explore the international culinary traditions of contemporary Limerick between 5-10pm.

Between 7.30pm and 10pm, De Búrca Traditional Butcher Shop and Deli will host a Poetry reading by Paddy Mhéime ó Súilleabháin from his debut poetry collection ‘Fuaim na Gaoithe Aniar’with wine and nibbles. This will be followed by an outdoor cinema at the back of the Butcher’s where they’ll screen the post-apocalyptic butcher-related black comedy Delicatessen.

Off the charts: why this paint colour is Instagram's favourite
10

The end of Irish emigration to America as we have known it?
Real news has value SUBSCRIBE