Baked Alaska: Having their cake and eating it

When getting to a bakery requires a plane ticket, ‘cake ladies’ do a roaring trade 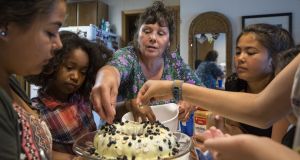 In a modest boardinghouse on an Alaskan island just 30 miles across the sea from Russia, a handwritten order form hangs on the refrigerator. There are photos of cakes a few women in this village can make for you: rectangles of yellow cake and devil’s food enrobed in buttercream, with local nicknames piped out in pink.

Travelling out here, where huge bones from bowhead whales litter the beach, takes a 90-minute jet ride north from Anchorage and another hour by small plane over the Bering Sea. In this vast, wild part of America, accessible only by water or air, there may not be plumbing or potable water, the local store may not carry perishables and people may have to rely on caribou or salmon or bearded seal meat to stay fed.

But no matter where you go, you will always find a cake-mix cake.

Elsewhere, the American appetite for packaged baking mixes is waning, according to the market research firm Mintel, as consumers move away from packaged foods with artificial ingredients and buy more from in-store bakeries and specialty pastry shops. Yet in the small, mostly indigenous communities that dot rural Alaska, box cake is a stalwart staple, the star of every community dessert table and a potent fundraising tool.

“Cake mixes are the centre of our little universe,” says Cynthia Erickson, who owns the only grocery store in Tanana, an Athabascan village of 300 along the Yukon River in central Alaska. “I have four damn shelves full.”

Eating in rural Alaska is all about managing the expense and scarcity of store-bought food while trying to take advantage of seasonally abundant wild foods. Cash economies are weak, utilities and fuel are expensive and many families live below the federal poverty line.

To offset the cost of living, Alaska Natives here rely on traditional practices of hunting, fishing and gathering, known as “subsistence”. In a good year, they fill freezers with moose, berries, caribou, salmon or marine mammals, depending on where they live. In a bad year, they have to buy more from the store.

The offerings in village stores often resemble those in the minimarts or bodegas of the United States’ urban food deserts – at two and three times the price. Food journeys in via jet, small plane and barge. Milk and eggs spoil fast. Produce gets roughed up. Among the Hostess doughnuts, Spam and soda, cake mix is one of the few items on shelves everywhere that require actual cooking.

As a result, tricking out mixes has become a cottage industry, and many villages have a “cake lady” with her signature twist. Some bake as a hobby, while others do a brisk business selling cakes in places where getting to a bakery requires a plane ticket.

In the far north, bakers make cake with fondant photo prints of Inupiat whaling crews and serve it with mikigaq, fermented whale meat. On the western coast, mixes may be prepared with sea gull eggs. In the interior, pineapple upside-down cake is eaten with a salad made of lard, sugar, berries and whitefish. Fundraisers known as cake walks — a variation on musical chairs — pay for coffins, support people through chemotherapy and send whole basketball teams on the long – and expensive – journey south to play in other states.

On a midsummer day in Tanana, people haul king salmon from their Yukon River fish wheels, then cut and hang them to smoke on the beach. Erickson is mopping up a load of thawing produce that had come in frozen, a common shipping hiccup for rural grocers.

What to do with a load of icy bananas? Use them in a cake mix.

But with one substitution or another, you can always make a mix cake. Mayonnaise can take the place of an egg. Some recipes call for nothing but a mix and a bottle of Sprite. The Whole Foods crowd may judge it, she says, but where she lives, it makes sense.

In the wintertime, when Iditarod sled-dog mushers and Iron Dog snow machine racers pass through Tanana, everybody asks for Erickson’s rum cake. It’s her mother’s recipe, from the Athabascan village of Ruby, 120 miles downriver, made with yellow cake mix, vanilla instant pudding and a half-cup of Bacardi.

In Unalakleet, 300 miles west of Tanana on Norton Sound, Donna Erickson (no relation to Cynthia) is a noted cake lady. Her most famous creation was born in a rush to get to a community potluck. She made a white cake and poured it into a sheet pan because she knew it would bake quickly.

“I mixed orange Jell-O with two cups of bright orange salmonberries. I poured it on top of that cake and I threw it in the fridge,” she said. “People were just like, ‘Wow, can you make that again for me?’”

Rural Alaska has some of the highest rates of accidental death and suicide in the country. When there is tragedy in Unalakleet, bakers bring cakes to the school multipurpose room and lay them on a big table with corresponding numbers. Popular flavors include salmonberry, tundra blueberry and low-bush cranberry.

Then the cake walk begins: People buy a ticket, then circle the table while music plays. When it stops, somebody draws a number out of an old coffee can. The person standing by the corresponding cake wins that one and the money goes toward healing someone’s family, Donna Erickson says.

“It’s a festive environment even though it’s a sad time,” she adds. “You should see the cakes; they are so beautiful. Village bakers are so brilliant.”

In the United States’ northernmost town, Utqiagvik (formerly known as Barrow), baker Mary Patkotak is an expert at cake economics. She uses Betty Crocker triple chocolate fudge mix for her famous cherry-chocolate cake. In the village store, it costs $4.59 a box. On Amazon, where Patkotak orders it, it’s $1.29.

Alaska’s many weather delays mean the mix never shows up on time, but she doesn’t care because it qualifies her for partial refunds on her annual Prime membership.

“I can’t remember the last time I paid the Amazon Prime fee,” she says.

She bakes when she knows a payday is coming around. She ships cakes and cupcakes to out-of-town customers who order from her Facebook page, freezing them and tucking them into the cargo hold of a small plane. “We don’t have any bakeries. We have very few restaurants,” she says. “People really crave the fresh cake.”

Last winter, Cynthia Erickson snowmobiled an old propane stove to her summer hunting camp, 50 miles northwest of Tanana on the Tozitna River. It fell apart on the way, but her husband wired it back together. She fired it up and slid in a chocolate cake.

It’s a simple thing, making a cake from a box, but when you’re doing it at 30 degrees below zero in Alaska, you feel rich, she says.

“I was, like, the camp queen!” she says. “Middle of nowhere, eating cake.”