Chinese New Year events in Dublin for all the family 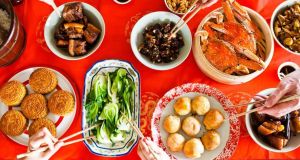 Chinese New Year, the year of the rooster, is being celebrated at a two-week festival of culinary, cultural, musical and sporting events in Dublin

Chinese New Year 2017 is being marked in Dublin by a two-week festival to celebrate the arrival of the year of the rooster. The 10th Dublin Chinese New Year Festival kicks off on Friday, January 27th with an opening ceremony in Meeting House Square in Temple Bar (7pm, free).

New Year’s Day is Saturday, January 28th, and over the following two weeks, an extensive programme of cultural, musical, culinary and educational events will take place all over the city.

Family gatherings, accompanied by lavish meals featuring dishes that have special significance – a whole fish representing abundance or surplus to be carried forward into the coming year, for instance – are at the heart of the New Year celebrations.

Also on January 29th, Asian Flavours on a Lazy Bike Tour is a leisurely two-hour cycle (on electric bikes), around Dublin’s informal Chinatown, visiting restaurants to taste authentic dishes and learning about Chinese influences in the city (2-4pm, €25).

How to hotpot – only do it with people you like is the number one rule, apparently – is the theme of an event at Lao restaurant in Parnell Street on Thursday, February 2nd (6.30-8.30pm, €20). Rather than just dump random ingredients into the hot stock or oil, learn how to do it properly. Karaoke and Chinese Bites is the tempting title of another festival event at Lao, on Sunday, February 5th (5pm, €10).

A more restrained exploration of Chinese culture will be on offer at the tea ceremony which will take place at the National Botanic Gardens in Glasnevin on Thursday, February 9th (2pm and 3pm, free but booking required).

If you’d like to know more about the background to the celebrations, book a place to hear a lecture by Dr Adrian Tien of Trinity Centre for Asian Studies on Chinese Eating and Drinking: A Linguistic and Cultural Perspective. It takes place on Tuesday, January 31st (6.30pm; free but booking required).

But it’s not just about feasting, and the Chinese New Year Festival cultural events will include an exhibition of Yan Wang Preston’s four-year Mother River project at the Gallery of Photography (January 28th-March 5th); Catching the Spirit of Chinese Art, a talk by John Blair and Jerusha McCormack at the Chester Beatty Library on Thursday, February 2nd (1.10pm), and the RTÉ National Symphony Orchestra Chinese New Year celebration, with guest artists from China, at the National Concert Hall on Monday, February 6th (8pm, €15).

Family events include a ping pong tournament; make your own lantern craft classes, and an Irish/Chinese New Year youth concert. There will also be an opportunity to watch a series of films of Chinese interest at a variety of venues including Dublin City Gallery The Hugh Lane, and the Chester Beatty Museum.

For the full programme of events, or to book tickets, see dublinchinesenewyear.com