Belgium’s Lambic sours: ‘As weird as beer gets’

Beerista: The Belgian sour style is a strange and wonderful drink 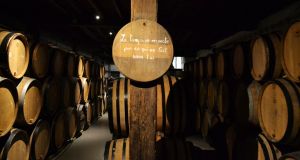 Lambic is left to age and develop in big wooden barrels called foudres, then carefully blended and sampled. Photograph: iStock

Sourness triggers a kind of warning signal in the brain – it thinks something must be wrong. Like when you eat a bag of sour jellies, a kind of battle plays out as the brain starts sending alerts: is this a good idea? Will this make you ill? And as more and more of the sweets are thrown into your mouth, eventually the brain’s warnings are overridden and it gives up – until the next time.

The same thing happens when you drink a sour beer. Lambic is the king of sour beers, and is, as the eminent beer writer Randy Mosher puts it, “as weird as beer gets”.  Lambics, which originate in the region surrounding Brussels, are made using the ancient and fascinating process of spontaneous fermentation. This is when the wort (beer before it has been fermented) is left to cool in the open air to pick up any bacteria and yeasts floating around.

It’s left to age and develop in big wooden barrels called foudres, then carefully blended, sampled – and sometimes dumped – to create what can only be described as a strange and wonderful drink.

You’ll find Lindemans Gueuze Lambic – which is made from blending a three-year old with a one-year-old Lambic – in many good off-licences. It’s a little sweet and cider-like to start, but then you’ll taste fruit, honey, a touch of orange blossom, and a kind of earthy, grassy or farmyard tang. It’s highly carbonated with a lovely golden clarity and a dry finish.

As for the sourness? It’s a little mouth-tingling initially but very pleasant and well-balanced as you drink.

There are variations on the Gueuze Lambic style – those made with fruit, such as Cantillon’s Rose de Gambrinus, or Boon Oude’s Gueuze Mariage Parfait, which is a little higher in alcohol and worth seeking out – but everyone should try one of these complex, layered and truly eye-opening beers at least once.