Protecting the essence of the craft in craft beer, Wicklow Brewery plan to keep their brews local to Wicklow and Dublin 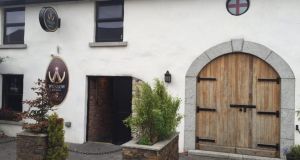 Wicklow Brewery is one of those rare things in Ireland – a micro- brewery with a licence to sell its own beer. Run by Leigh and Ashley Williams, the bar and brewery is an offshoot of Mickey Finn’s pub in the sleepy village of Redcross in Wicklow, standing in what was formerly a bakery.

The ash wood that shapes the counter top of the bar came from a tree that fell on to their property from a graveyard on the other side of their property, while the spring well that feeds their taps flows from deep beneath the family farm.

It’s a place that thrives on its own locality, and even though the master brewer, Mathis Korme, is from Bavaria, there’s a touch of Wicklow about the ebb and flow of his description of the beer he’s produced.

They have five beers on tap in the brew house: Wicklow Helles, St Kevin’s Red, Wicklow Weiss, WB-40 and Wicklow IPA, and with no middleman to push up prices they charge €4.50 for each of them. Leigh and Ashley are excited as they talk, brimming with pride. Their stories overlap and weave together as they relate the layers of experience and hard work that have allowed the brewery to burst to life.

In an attempt to protect the essence of the craft in craft beer they plan to keep their brews local to Wicklow and Dublin. It’s a big enough market, they say, and have already had such a run of demand that once this year they entirely ran out of stock, seeing the brewery bar run dry, tap by tap.

It’s a beautiful place – a celebration of wood, music and tradition, with the warm aroma of hops wrapping itself around everything. Take the tour, try the beer, stay for lunch and enjoy a bar and a village that sets out to be nothing more than itself.