This is a dark, inviting space that is all about the wood, the whiskey and the welcome 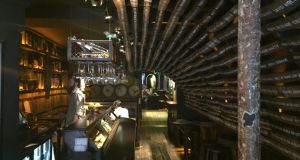 Less than a year old, the Dingle Whiskey Bar on Nassau Street is already wrapped tight in tradition. A Dublin outpost of the Dingle Distillery in Kerry, it was carved out of a former jewellery shop on Nassau Street. The curved, thick glass windows that once protected gold and silver now open into a dark, inviting space that is all about the wood, the whiskey and the welcome.

Down in Kerry there are hundreds, perhaps thousands, of barrels quietly ageing a new, as-yet unnamed, whiskey in port, bourbon and sherry casks. These same casks shape the entrance to the Dublin pub, with strips of barrel wood holding the names of the Founding Fathers of the distillery overhead.

Landlord Oliver Hughes of the Porterhouse group has created a space that’s driving whiskey education. In the corner 10 new whiskey enthusiasts are taking the regular Tuesday night masterclass, while barman Jack Tannam helps others choose the perfect whiskey for them. It’s all about your own personality and taste, Jack says, and the numbers of younger drinkers he sees becoming locals at the bar and seeking out a whiskey education are really encouraging.

The whiskey menu is outstanding and along with colleague Tom they’ve just launched a whiskey flight menu – groups of three whiskeys selected to complement each other and take you on a journey through the Irish (and international) whiskey trail.

Themed by flavour or tradition you can try three 20ml tastings of Irish labels but also international ones – they stock Japanese and Indian whiskey and have no fear of Scotch. The Dingle Whiskey Bar, rooted in Ireland, has a confident international outlook. Step up to the bar, become a local and take your own journey.

2020 bargain cars: What to buy with a limited budget in mind
4

Life as a carer: ‘If something happens to me, what will happen to my girls?’
10

‘Sadly my marriage ended, but it was the kick I needed to start my own journey’
Real news has value SUBSCRIBE