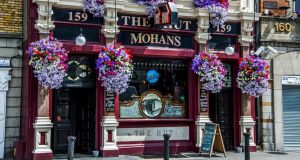 They say The Hut got its name from the hut-style dwellings locals lived in when it opened its doors in this now-popular city centre district more than 150 years ago.

Since then, this Victorian palace has been a solid anchor in a part of Dublin that pulses with modern city life – the elegant red-brick streets battling for dominance on a loud, brash crossroads that helps define Dublin’s personality.

As life whistles by outside, the old gas lamps, the dark carved-wood interior, the stained glass and mirrors hold the world at bay.

It’s been described as an old man’s bar and locals will certainly check you out as you enter, but that’s allowed – it’s a home from home after all. But more than just locals, it’s stuffed full of Dublin characters and considered one of the most dog-friendly pubs in Dublin.

At the bar I meet local man, Brian Downey, who talks me through his slice of life at The Hut. His father was a local, as was his grandfather, once a gravedigger in nearby Glasnevin. His drinking companion, Christy Prendergast, is there too, pointing out the artwork, the stuffed animals, the beauty of it all. They clearly love this place and I quickly realise they and their comrades make The Hut what it is: a wonderfully real place that lives life with you.

For the past quarter-century, it’s been owned by the Mohan family, a Donegal-Leitrim match, who have championed great pints, beautiful surroundings and a warm welcome. Joe Mohan describes his role as “just minding the place” and he’s proud of the job. The Hut is a jewel on the edge of the city centre tourists haven’t discovered. A punk band recently took up residence upstairs. It’s a crazy marriage of traditions that somehow works. Gary Quinn