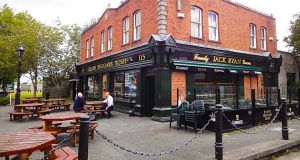 The wind and rain is whipping up a storm on the historic crossroads outside Jack Ryan’s pub. Inside, the fire’s blazing and there’s a bottle of the 15-year-old centenary edition of Jack Ryan’s whiskey by my hand. Only 500 bottles have been released to mark what would have been Jack Ryan’s 100th year, and 100 of those bottles have been held for the Irish market. I’m privileged to be tasting it here where it all began with Eunan, Jack’s son. Jack moved with his father Thomas (Eunan’s grandfather) into the upstairs living space above the original pub in 1913 and the then British army barracks next door drove all manner of drama past its doors.

There’s been a pub here since 1803 and though the original building was lost to a compulsory purchase order by the State in 1967, the Ryans held their ground until the OPW realised their plans for the site weren’t going to bear fruit. The family bought it back and rebuilt the pub in 1988.

Today, it’s a famously sporting pub, jammed on match days and wonderfully local. Visit on a late afternoon and you’ll get a flavour of the passion that drives it and experience the care that’s been put into bringing Thomas and Jack Ryan’s vision home again. It’s got great literary links and American poet John Berryman was a regular visitor when he lived nearby in the 1960s. A BBC interview he did with writer Al Alvarez was filmed in Ryan’s and a photograph of Berryman and Jack Ryan chatting is used on the label for the centenary edition.

Jack Ryan’s whiskey is possibly better known in the US since its launch in 2013 but with a recent strong recommendation in Jim Murray’s Whisky Bible and a win at last year’s whiskey awards, a glass at the bar of its Dublin home is now a destination in itself.