No 6: Established in 1899, Grogan’s has held its current position as a refuge for the literary and the lost since the 1970s 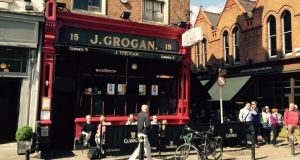 Grogan’s: a place to become someone

Grogan’s is a permanent anchor in Dublin’s city centre, unshakeable in the face of constant change. Established in 1899, it has held its position as a refuge for the literary and the lost since the 1970s when its then-new owners proudly seduced the city’s best-known writers and artists.

It was the first pub in Dublin I visited 20 years ago and every time I step through its doors I get a rush of the youthful energy that brought me to the capital in the first place. It hasn’t changed much since and that’s its charm.

It’s a place to become someone: a writer, a painter, a talker. If you can get a table in the lounge on any night of the week hold on to it – you’ve got a seat in one of the hippest spots in town. Young and old mingle easily here without distraction, heads turned only by the art on its walls.

The bar staff are old-school: courteous, welcoming and wholly professional. They know everyone worth knowing by name and are as happy to serve you a pot of tea as a pint of plain.

Grogan’s managed to outrun the Celtic Tiger, unlike many of its contemporaries, and it celebrates that by being a real home to many wonderful people. Treat it with the respect that that deserves and you’ll find yourself spending many great nights and days within its ageing wood-panelled walls, resting your feet on its blue-patterned carpet, reflecting on life below the stained glass on its walls.

There’s no music, no television, no nonsense. It’s a place to return to in search of yourself. Who knows, one day they may even greet you by name and then you’ll know you’ve finally arrived.

Irish conductor the first woman to lead orchestra at Oscars
3