With a 130-bottle whiskey collection and beautiful snug and grocery bar, the old-style pub at the front of Flannery's has become its figurehead 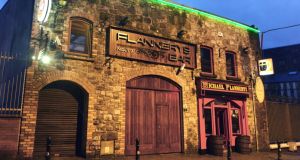 At 82 years old, Michael Flannery must be the oldest working barman in Ireland. His sons, Liam and Seamus, put his enthusiasm for the job down to his love of great conversation and the fact that once you’re on the premises and you talk to a customer you’re already on duty, so why would you be giving up the job.

He never wants to quit, they say. Besides, he has fantastic pedigree – his grandfather started the chain of events in Rearcross in Tipperary in 1898 opening the first family pub.

His grandsons Michael and his five Flannery brothers didn’t shirk the tradition and each opened their own pubs, five in Limerick and one in Dublin. It pushed the family trade to a whole new level but also knitted the bar trade deep into the roots of the family tree.

Despite growing up among all this, Michael’s sons took up careers in accountancy and aviation before their heads were turned back to the family trade in the late 1990s. By then, Michael’s pub was on William Street but the smoking ban and no room to expand encouraged them to take up residence a couple of streets away in their new home on Denmark Street near the river.

With a rooftop bar, a courtyard and large venue for everything from sports to parties, they were still missing a vital ingredient and from this the small front bar was born.

It’s easy to think of it as being old as the family’s heritage but then it took all of that to build it. Father and sons forged a beautiful traditional bar that’s become their figurehead. They keep their 130-bottle whiskey collection there and the snug and old shop bar are beautifully cast to allow their renowned whiskey tasting to unfold. It’s a real treat to visit – the polished wood, dark corners and terrific service uncovering a truly genuine Irish experience.