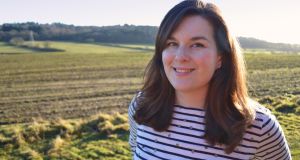 Charlotte Pike: At Litfest she will be demonstrating how to smoke food at home.

What makes a woman who has carved out a successful career in the City of London ditch it all and set out to write cookbooks and teach people how to cook?

Actually make that women, not woman – and the question can be answered by both Sumayya Usmani and Charlotte Pike, who are doing cookery demonstrations at Litfest based on their latest books.

Usmani was a lawyer and Pike worked at JP Morgan; they pounded the same pavements and possibly queued for lunch in the same cafes. But now here they are, rattling the pans and inspiring people to cook more, and better.

Before changing career, Usmani had a sideline as a food blogger. She has since ditched the rather provocative handle she gave herself, the Pukka Paki. Paki means pure, she told me on a visit to Dublin to cook at an event at Kinara Kitchen in Ranelagh in 2013. She has now rebranded as My Tamarind Kitchen.

Her business was just taking off at that stage, but now she has just published her second book, writes about food for a variety of international titles and is in demand to teach the cuisine of her native Pakistan all over the UK, and now Ireland.

Two years ago, she moved from London to Glasgow (“I moved for a better life for my daughter and myself”) and has just bought a house there. She presents Kitchen Cafe on BBC Radio Scotland, and is enjoying exploring what she calls “Scotland’s natural larder” in her cooking.

“I love teaching people the way I cook, which is through using my senses, which is the ethos of Pakistani cookery and is known as andaza, or, as I like to call it, sensory cooking.”

Charlotte Pike’s career change came when she found herself coming home from a long day at the office, and baking through the night. Something had to go, and for her it was the day job.

Like many career switchers before her, Pike enrolled in the 12-week course at Ballymaloe Cookery School. Taking part in a fermentation workshop there ignited her interest in the subject and inspired her to write a book, Fermented, in 2015, way ahead of the curve.

Since then, she has established what she calls “a food education social enterprise in Oxfordshire” called Field & Fork School. It currently operates as a pop-up cookery school, and she is working to secure funding for a permanent site for the project, which runs “low-cost food education classes for people from all backgrounds”.

Usmani’s first cookbook, Summers Under the Tamarind Tree, is a memoir and collection of family-style recipes from her native Pakistan. Her second, Mountain Berries and Desert Spice, was published in April. It “maps the dessert and sweet culture of Pakistan, where it is more than just a third course. It is an exchange of sweets during celebrations and festivity, or over tea with friends,” she says.

At her Litfest demo, she will be cooking dishes from both books. Attock chapali kebabs, Pakistani street food; karhai ginger chicken, as cooked by her mother, and Lahori fish are the recipes from Summers Under the Tamarind Tree she will work from.

The sweet dishes will be memon lappi, which she says is “crunchy oats with jaggery, cinnamon and fennel seeds – Irish jumbo oats will work beautifully”; a northern Pakistani dish of stewed Hunza apricots with thick cream and apricot kernels, and rose lab-e-shireen, or Pakistani trifle, which she describes as a Karachi classic.

At Litfest she will be demonstrating how to smoke food at home, using both hot and cold smoking methods. “We will run through all the key equipment and pointers such as woods, brines and rubs, and I will show people different pieces of equipment and offer guidance on what to buy or make, and how to do it.”

Duck, trout and cheese will be smoked, and used in a variety of recipes including smoked Cheddar, leek and mushroom quiche; smoked duck salad with orange, pomegranate and pecan, and smoked trout pate.