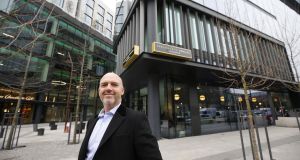 Opening a new restaurant must be a bit like giving birth. Nothing much happens for what seems like an age, then all of a sudden, it’s all hands on deck.

Just 12 days ago, when the Irish Times knocked on the doors of Shelbourne Social, Dylan McGrath and Vincent Melinn’s latest restaurant and bar, it was still a building site, with no staircase connecting the ground floor and the mezzanine, and definitely no sign of a kitchen.

At a rescheduled appointment on Tuesday morning of this week, the 85-seat venue at the base of the landmark Number One Ballsbridge development in Dublin 4, is beginning to look like a restaurant and cocktail bar. Maybe not one ready to serve its first (non-paying, family and friends) guests in eight hours’ time, but certainly on course to open its smokey glass doors to the paying public tomorrow.

This time, all the players are present. McGrath and Melinn are on site, as are McGrath’s brother Billy Creaney and Melinn’s son, Gerard, who both hold senior positions in the hospitality group’s management structure.

Furniture is being unwrapped, artwork hung, bars brought into service and snag lists attended to. In the kitchen the ovens are on, the chefs are working through prep lists, and shiny new pots and pans are stacked high.

There has been much speculation about what McGrath and Melinn would do with this 6,500 sq ft space, their sixth restaurant concept and their first outside the city centre. In the end, they have brought a taste of Manhattan, a plushly leather upholstered bite of the Big Apple, to Ballsbridge, at an estimated cost of €3 million.

“We wanted to create something that was a little bit 1930s, and there’s an old fashioned kind of American style that I think is really cool, and I don’t see it here a lot,” McGrath says. It feels understated, luxurious and expensive – an impression compounded by a menu peppered with spendy ingredients and generous portions of expensive cuts of meat, some carved tableside and designed for sharing.

The restaurant, on the ground floor, has tan and green button-back banquette seating and black leather chairs. The dining tables are topped with Italian leather – burgundy with the tan upholstry and grey tops with the green. They look like they might be high maintenance. “I know, I know. We’ll see,” McGrath says. “We saw them in another restaurant, we loved them and we’re going to look after them.”

Those talking tables, and the dining chairs, which took six goes to get right, according to McGrath, were made by Dublin firm, Delaney’s Bespoke Furniture. Upstairs, in the mezzanine cocktail bar, the tables are grey Italian marble with a striking green vein, alongside squishy leather tub chairs and more banquettes.

McGrath and Melinn get heavily involved in the design concepts for their businesses. Planning the newcomer took the chef turned restaurateur to LA, New York, Las Vegas and London, and he readily admits that he was “influenced by a couple of restaurants”. Any in particular he’d care to name? “No, it’s top secret,” McGrath says. At the end of our 90-minute chat, the words Legacy Records (the name of a restaurant that opened earlier this year in Manhattan)  are mentioned, and a quick Google search perfectly illustrates a primary source of the aforementioned inspiration.

The food offering, though, is a McGrath original, through and through. McGrath version 2.0 though. “It’s not fine dining, it’s not perfection, fussed over for my ego on a plate,” says the former Michelin star chaser. “That’s not what this is. It’s the freedom to say, this is delicious, it’s incredibly simple, but it’s solid.”

The menu opens with an option of a hot curd bread, cooked on a hotplate, to order, and served with a variety of toppings, running from €6 to MP or market price, for Oscietra caviar and seaweed butter. Market price? If you have to ask, you probably can’t afford it.

The bread, though, does sound delicious – a word McGrath uses repeatedly while going through the menu. “I’ve put sheep’s and goat’s curds into it. We’ve spent months on it, but at the end of the day it’s a hot fried bread. I want it to be fun,” he says.

There are crudo and “nearly cooked” sections of the menu, as well as appetisers, meat, fish, vegetables, and a selection of what is termed starches, that runs from potato purée at €7.50, to thin slices of Wagyu on crisp Pink Fir Apple potatoes with sesame, roasted garlic, hot sauce and crème fraîche.

That last named “starch” will set you back a breathtaking €45. “It’s no joke putting on a potato dish for 45 quid,” says McGrath the restaurateur. McGrath the chef counters with: “But if you have it between you and your friend, you’ll have it again. It’s delicious.” That word again. Is it a menu designed to McGrath’s personal tastes then? “Well I’d love to eat here, yea. Yea,” he replies.

Other big ticket menu items include a whole roasted duck, with confit legs, citrus pancakes, preserved lemon, bitter leaves and rice, carved tableside from a trolley and serving two to three diners (€110). Big platters of 35-day aged rib eye with pickled red onion, fried chard and Café de Paris hollandaise (€120) and sliced smoked short rib with pickles, horseradish and fried crumpet (€90/€120), are also designed to be shared. “This is not food to be fussed over, it’s food to be eaten.”

To be eaten just by suits with expense accounts, and residents of the 88 apartments in the building, where a two-bed runs to a rental high for the city of €3,850 a month?

Not so, McGrath says. There are chicken wings – triple cooked in spiced beer batter, with Gorgonzola, fried parsley and garlic (€12/24 ) on the appetisers, and a burger – Wagyu, bien sûr – that will be a regular on the specials board (€30). These will appeal to the concert-goers and match-watchers that McGrath is canny enough to recognise will be a core element of his business, at weekends in particular.

If it all sounds a bit meat-heavy so far, it isn’t. Vegans will be offered a special menu “calibrated so they feel like we’re ready for them, rather than we’re doing an interpretation of tomatoes and olives because they happened to land in the kitchen.” Vegetarians could happily compose a meal from the “market” side of the menu, and fish options include skate baked in sticky onion sauce with rice and fried batter, for two (€45), as well as cod in yuzu miso with mushroom and pak choi (€28).

Couples or groups willing to embrace the sharing element will undoubtedly have the more satisfying dining experience here. Bar food, coming at a later date, will broaden the venue’s appeal. “We understand what works in terms of the social experience, we understand the food that people want to eat in that experience. But we are growing, we don’t want to be cooking the same thing we were cooking five years ago,” McGrath says.

Social experience, what’s that, other than a link between this and Fade Street Social, another McGrath and Melinn venue? “You’re being social, you’re coming here, you’re spending the night or at least a good chunk of your evening here, that’s the way the dining scene has gone,” is how McGrath describes it.

With that in mind, the mezzanine bar, open to drop-ins as well as pre- and post-dinner drinkers, has had a good chunk of the budget pushed in its direction. Karl Cooney, group mixologist, has designed a weighty cocktail menu with an interactive element. Point a hand-held UV device at the pages as you peruse them, and additional elements – secret cocktails, if you will – appear on the menu. Gimmicky? Yes. But fun? Hell yes.

Back in the kitchen, it is all shoulders to the wheel. McGrath will be putting on his whites and joining his core team of Rory Carville, Gavin McDonagh, Bernard McGuane and Mohamed Ouchbakou. He says he has been working on this menu in the development kitchen for months, and “couldn’t bring the food flavours together any other way”. He will be in the kitchen “with the lads, every day, cooking, until the Christmas break”.

Shelbourne Social opens for dinner on Thursday, December 6th at 5pm. Lunch will be offered Wednesday to Saturday, from December 12th. Reservations are being taken at shelbournesocial.com.

Do you know what’s really in your mayonnaise?
Real news has value SUBSCRIBE