‘Art and music are where his heart is’ 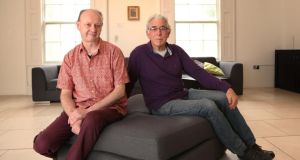 Brian McDonagh is a musician and painter. From Dublin, he was member of 1970s traditional group, Oisín. He moved to Sligo in the 1980s and was a founder member of folk group, Dervish which marked its 24th year with its ‘Thrush in the Storm’ album in April. He lives with his wife, Gay, in Sligo
My first memory of meeting Rory was after I’d moved to Sligo to live. My wife Gay and I went up to a restaurant called Tir na nÓg for lunch and ended up sitting at the same table as Rory and his wife, Mary. I knew we knew each other but couldn’t remember why. We discovered that back in the folk days in the 1970s we’d hung around the same places, Dublin pubs like The Meeting Place in Dorset Street and Slattery’s. We discovered we’d been at the same concerts. There might have been only 20 people at them, so we might have been sitting quite close to each other.

Oisín, the traditional band I was in as a teenager, was quite successful. We toured America, made four albums that I was on. But I was becoming increasingly interested in painting and got the opportunity to take up a college place here in Sligo. Rory and I became good friends over art.

He was involved in an arts festival in Sligo, and there was talk of setting up an arts centre, so a committee formed. Rory and I were on it and a number of other people, one of them being Joan Trimble, wife of the late sculptor Gary Trimble. She was in the OPW and had access to the Model school in the town. We took it over, spent a few weekends demolishing partitions. It turned into a very beautiful gallery.

I’m from Walkinstown. When I was growing up, it was right on the edge of Dublin and there was a huge farm behind my house. I spent my childhood with all the other kids tormenting the farmer. So even though I’m from Dublin I spent a lot of time in the country.

Dervish is nearly 25 years on the road now. I had no plans to start a new band. A friend, Seamus Egan, had started a session in Hannigan’s pub on Wednesday nights. Local musicians came in and I met the other members of the band. The Thrush in the Storm is our 15th CD and it’s getting tremendous reviews all over the place. We tour a lot, to the UK and the US and we’re going to Austria at the end of this year, to Chile in January. The summer is punctuated by weekends around Europe.

Rory and I meet up for a few pints, at music and arts events. He’s coming up later for a barbecue. He’s a very intelligent guy, a tough negotiator in terms of running a festival. He has a tremendous knowledge of music and a very strong visual sense. Art and music are where his heart is. He comes along to festivals we’re playing – it’s always good fun.

Rory O’Connor is a Sligoman who worked in the medical technology business for 35 years while also being involved in the arts in Sligo for more than 30 years. He co-founded Sligo Live and is chairman of the Model Arts Centre. He and his wife, Mary, live in Sligo. He is manager of the Tread Softly festival which celebrates the Yeats family’s links to Sligo. It runs until August 9th. See treadsoftly.ie

I ran the box office in the Ballisodare music festival in Sligo in 1977. It was one of the first big outdoor music festivals, before Lisdoonvarna. Brian, a young Dub, about 19, and his brother were in a band called Oisín who were booked to play. About six girls would turn up and say “We’re friends of Oisín’s” and then another six , and another. I had to go looking for the lads to tell them, there’s a limit to the guest passes, this can’t go on indefinitely.

I first met Brian there but I didn’t get to know him then. About 10 years later I was at a graduate art exhibition in Sligo and saw this self-portrait and thought, this is a really good piece and I bought it. I didn’t know at all that it was the same guy, I don’t think I even knew his last name. A friend of mine saw it and said, ‘oh, you bought one of Brian’s paintings. D’you know Brian, he’s a musician’. She introduced me to him, and a friendship developed from that.

Soon after that Brian and I were part of a group that started the Model Arts Centre in Sligo, and we became close friends through that. About 10 of us, including artists Sean McSweeney, Barrie Cooke and writer Dermot Healy, were consumed by this project to start an arts centre and gallery in Sligo. The Model was a fine cut-stone building, a model school built in 1862, that had been abandoned. We were totally hands on, knocking down partition walls, sanding floors, repairing broken panes of glass. Once we got in, we never left. Brian came to Sligo to go to art school as a mature student, he’d given up the music business. Then came Dervish. I didn’t know this but one of the guys in Dervish told me recently that I’d given Dervish it’s first gig. He said the first serious gig Dervish got was in the arts festival back in 1989.

Brian and I meet in places where there’s music, at home and abroad and we go to a lot of music festivals. We don’t plan holidays together but some of our most memorable weekends would be at folk festivals in Glasgow, Cambridge or in Edmonton in Canada. There’s a community of festivals around the world and Dervish would be playing at them. My wife Mary and I always have good times with Brian and his wife Gay. Do we have other interests in common? I’m very interested in football. I’m a big Sligo Rovers fan, nearly everyone in Sligo is. He couldn’t care less. Brian has a Dublin accent you could cut with a knife. He is legendarily laidback, but he gets things done, is very sociable, easygoing; I’ve never heard Brian say a cross word about anyone, which would be very different to me, I’m much more volatile.

Yoga with President Michael D Higgins? This could be your chance
6

What will €379,000 buy in Cyprus, Turkey, Italy and Co Meath
Real news has value SUBSCRIBE