‘King of Cling’, creator of ‘wonderful, timeless’ clothes’, designed for over 50 years 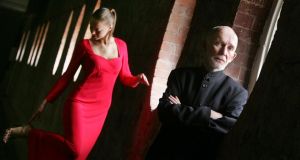 Richard Lewis: the late Irish designer at a preview of one of his collections, in 2008. Photograph: Matt Kavanagh

The death has taken place of the veteran Irish fashion designer Richard Lewis. He was 73 and had been suffering from cancer for two years. Known as the King of Cling for his signature use of jersey, he had a career that spanned more than 50 years.

The son of a dressmaker who made uniforms and nuns’ habits, Lewis studied at Grafton Academy of Fashion Design before opening a small boutique in Drimnagh, the part of Dublin where he grew up. He later moved to South Frederick Street, in the middle of the city, where he set up business with his lifetime partner, Jimmy Greeley, and where he remained until his retirement, two years ago. Greeley died of a heart attack in 2006.

A popular figure in Irish fashion circles, with a modest and unassuming personality, Lewis quickly attracted a devoted following. His most loyal clients included the socialites Terry Keane, Mary Finan and Tona O’Brien.

His choice of fluid fabrics in block colours, and his individual view of fashion, made him stand out from other designers. He evolved his couture over the years, although he once produced an inexpensive ready-to-wear collection for A Wear.

He was often compared to the UK designer Jean Muir. “I am tired of skinny dresses and ugly shoes. I hate centre back slits. I hate slouch,” he said in 2013, on receiving a lifetime-achievement award at Dublin Fashion Week.

“It feels like the end of an era,” the designer Peter O’Brien, a close friend of Lewis’s for many years, said. “He made these wonderful, gentle clothes that were timeless. He was resolute in his taste, and his jerseys were fantastic. In an era of throwaway clothes, people wore them and kept them – which is a pretty good legacy.”

Sharon Bacon, who first modelled for Lewis as a 17-year-old, in 1977, remembered the “timeless elegance of his clothes. He could dress anybody – any size, any height – and would always make them look their very best. He loved women and thought they should embrace their curves, and that informed his approach to design. When others would show something totally different each season, his kept his own handwriting, so anybody could recognise a Richard Lewis garment at a glance.”

Lewis was a long-standing member of the Council of Irish Fashion Designers; its founder, Eddie Shanahan, organised a retrospective of Lewis’s work at Create, the Brown Thomas department store’s annual Irish-fashion showcase, three years ago, and a 50th-anniversary fashion show on his retirement. “He knew his customers and was true to his vision and was admired for his longevity and ability to survive,” Shanahan said.

Lewis’s funeral will take place at Mount Jerome on Monday, October 1st, at 3pm. His is survived by his sister Mary.

Meitheal matters: Tell us about acts of kindness during the Covid-19 crisis

‘The lockdown might be driving you stir crazy, but some of us are used to it’
6