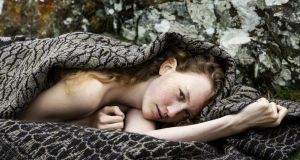 When a sheep farmer from Galway in July posted a receipt online for €17.75 for the sale of 355kg of wool sheared from his 245 sheep, it brought home how worthless wool has become in Ireland. A once valuable resource has become, in effect, a waste product in a declining industry (wool is officially classified as waste, like offal). The reasons for the low prices are varied: the collapse of the Chinese market which used to take a lot of wool; the Covid-19 pandemic; and higher demand for finer, softer merino wool produced in Australia and South Africa.

In Ireland, where Irish farmers primarily rear sheep for their meat and milk, 2.5 million ewes are shorn every year producing some six to seven million kilos of wool, but prices for wool now barely cover the cost of shearing. In an age when sustainability, provenance and environmental concerns are such hot topics, why a “miracle” fibre, a star performer with so many applications other than traditional woven fabrics, like insulation for example, should not be considered a valuable commodity is forcing many concerned people in Ireland – farmers, spinners, wool merchants, designers alike – to come together and find solutions.

Wool sequesters carbon, ticks all the boxes being natural, renewable, biodegradable and recyclable. Unlike manmade fibres, it doesn’t destroy the environment and isn’t a super thirsty fibre to grow, like cotton. The demand to change its official EU classification as waste and restore it to its rightful status is gaining momentum, and the call to establish an Irish wool council has become more pressing. Creative ideas using modern technology are needed for alternative uses for wool.

Next weekend in Galway in Project BaaBaa, forces for change are gathering together in a pioneering initiative by Deborah Evers, a fruit and vegetable gardener, whose aim is to give the public a better idea of how we benefit from sheep and heighten awareness of the uses of their fleeces. A key event is a European-wide online conference featuring speakers from sheep farming and associated agencies in research, design and eco innovation, supporters of the worldwide Campaign for Wool.

The weekend will also see the launch of Ireland’s first 100 per cent organically grown Irish knitting wool, Yarn Vibes Organic, coloured with natural plant dyes. This is a pilot project involving the collaboration of a ninth-generation farmer from Kildare, Fergal Byrne, who is chairman of the ICSA Organics Committee, Joan Lucey of Scribes & Vibes in Cork, and Chris Weiniger of Donegal Yarns in Kilcar.

It is one of many initiatives in which Weiniger, head of a company that supplies yarn to international luxury brands such as Gucci, Prada, Thom Brown, Burberry and J Crew, has supported, showing how wool can be used in other ways for different applications in fusion projects, mixing it with hemp, for example, or industrial waste with the support of universities north and south. “The key is collaboration,” he says. Lucey adds: “We want more people to use Irish fleece and breed sheep suitable for knitting wool.”

One of the highlights of the weekend is the Wool Showcase at the Printworks in Galway featuring a host of Irish designers and makers who use wool in Irish fashion and fabric design. Curated by stylist Paula Hughes, more than 20 exhibitors include Colin Burke, The Tweed Project; Bernie Murphy, Magee; Rebecca Marsden, Westend Knitwear; Electronic Sheep with makers Cushendale Woollen Mills, Donegal Yarns, Eddie Doherty, Studio Donegal, Molloy & Sons and Mourne Textiles.

There will also be a screening of the fashion film Fi by photographer and film-maker Perry Ogden. The exhibition runs from Friday, October 30th to Friday, November 20th. Covid 19 restrictions apply.