Fierce Grace is a new type of yoga, now available in Dublin and Kildare 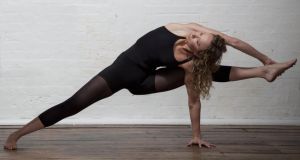 Bikram isn’t all coconut water, type-A personalities and perfectly svelte bodies in overpriced stretchy pants. It’s a challenging and rewarding form of yoga, but it has its drawbacks.

If you’ve been curious but too timid to try it out, or if you’re a regular who’s heard “lock out your knees” one too many times, you might be interested to know that there’s a new type of hot yoga in town.

Last year, Michele Pernetta, one of the UK’s leading yoga teachers and the woman who brought Bikram to the UK in 1994, introduced her own brand of hot yoga. Fierce Grace is a five-class hot yoga system based on classical Hatha, Ashtanga and Bikram yoga that aims to improve strength and flexibility for body and mind. It’s designed to be suitable for students of all levels.

Like Bikram, Fierce Grace classes are conducted in a hot room to warm your muscles and help you go deeper into postures, but it is about five degrees cooler (approximately 35-38 degrees). Unlike Bikram, the system includes core and upper body strengthening exercises (hello abs), accommodates for injuries by allowing posture modifications and consists of different classes to cater for different physical goals and schedules – and to keep you from getting bored.

When I found out that Linda Condron and Sean McNamee, owners of Boss Hot Yoga Studios in Dublin city and Maynooth, recently brought Fierce Grace to Ireland, I had to give it a go.

I popped down to their Stoneybatter studio on a Saturday morning. As a bit of pop/rock played in the background (I was too busy concentrating on not falling over to be able to describe the music any better than that), Condron led the class by calling out postures, explaining their benefits, demonstrating if need be, suggesting modifications and encouraging students by name. I loved the wider range of postures, the lack of second sets in most cases and the prospect of being able to come back and do an entirely different class.

Ninety minutes, a shower and a litre and a half of water later, Condron tells me her philosophy is to “teach with humour”, and instead of pushing her students, she tells them to “listen to what your body is doing and do what you can do today”.

After practicing Bikram for 13 years, Condron grew bored and disillusioned with it, so she decided to make the switch.

“For me personally, I really found my love of hot yoga again with Fierce Grace,” she says. “I love the variety of classes.”

There’s the Classic (90 minutes), a no-frills, whole body workout that’s more similar to Bikram than the others; Fierce Grace (80-90 minutes), an expanded whole body workout practiced to music, with an optional 10 minutes for meditation; the Fix (50 minutes), a fast-paced, high-powered class for students on a tight schedule or anyone looking for a stronger cardio kick; Deep Core (75 minutes), “a complete yin class” practiced to music that focuses on slow, deep stretches and floor postures; and Fierce, aka the Beast (one hour and 45 minutes), the advanced class.

“Although Bikram is great, and it kind of is an all-over body workout, there’s not enough core strengthening and upper body strengthening in it,” says Condron. “Now that we’ve switched to Fierce Grace, we’ve got a lot of people saying, ‘Oh my God, I can’t do that, I have no upper body strength,’ even though they’ve been practising Bikram for many years.”

Fierce Grace is certainly physically different from Bikram, but it’s the difference in attitude that particularly stood out to me. It’s disciplined and challenging, but the atmosphere is laidback and just, well, fun.

I don’t know if I’ll go back to Bikram, but I’ll definitely be back in the Stoneybatter studio to try out the other Fierce Grace classes.

New students can avail of an introductory offer that includes one month of unlimited classes for €49. See bosshotyoga.ie

‘Maskne’: Is your face mask causing skin problems? Here's how to fix it