London Fashion Week: Tommy Hilfiger’s return and four other things to watch for

What are this year’s big trends, who are the Irish designers in London and more 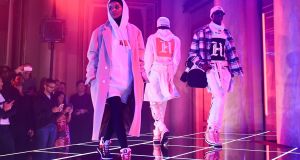 TommyXLewis, a collaboration with the brand Tommy Hilfiger and Formula 1 racing driver Lewis Hamilton, is expected to be one of the highlights of London Fashion Week. Photograph: Miguel Medina/AFP/Getty Images

London Fashion Week kicks off today when some 250 designers, including some Ireland’s most established and up-and-coming fashionistas, decend on post-Brexit land by the Thames, with their latest collections in tow.

As one of the one of the world’s Big Four fashion weeks, along with New York, Paris and Milan, what happens in London, will definitely not stay in London: the trends from the catwalk will be coming to a high street near you within weeks.

Here is what to expect at London Fashion Week 2020:

The hot topic continues to be an overriding theme in fashion and many designers in London will be showcasing their ingenuity and credible ways of dealing with waste and traceability.

Ones to note include cashmere suppliers Johnstons of Elgin, Mulberry (who will be showing how their sustainable Portobello tote is made), Phoebe English (all production made in London), Vivienne Westwood and Irish designer Richard Malone. For Copenhagen fashion week, where a sustainability action plan has been put in place, brands will have to meet a range of targets or face exclusion from the official show schedule. This has yet to happen in London.

Several new gongs will be handed out this year, including the inaugural Karl Lagerfeld Award for Innovation, named in honour of the legendary designer who died in February 2019 at the age of 82. The award will go to one of the 10 finalists competing for the International Woolmark Prize, who include Irish designer Richard Malone. All the finalists have focused on traceability and adding transparency to their supply chains. The award will be announced on Monday.

On Tuesday, the Queen Elizabeth Award for British Design will be presented to jewellery designer Rosh Mahtani of Aligheiri by Princess Anne.

The Tommy Hilfiger roadshow returns to London this season with the TommyNow SS 20 collection in collaboration with Formula 1 champion Lewis Hamilton after showing last season at the Apollo Theatre in Harlem. The show, which has travelled all over the world and promises to be a mega fashion extravaganza, takes place at the Tate Modern on Sunday, February 16th .

The Positive Fashion Exhibition is a curated space with brands showcasing a presentation, campaign or interactive storytelling experience that relates to the one or more of the three pillars of Positive Fashion: environment, people, craftsmanship and community. The exhibition will host an interactive social media phone booth set up by Amy Powney of Mother of Pearl to slow down fashion’s footprint and a Swap Shop by Patrick McDowell, where guests can bring a used piece of clothing from their wardrobe to exchange.

DiscoveryLAB aims to highlight the intersection of fashion, art and technology in which Irish designers Katie Ann McGuigan and Richard Malone will be two of those taking part.

Though there are no emerging or promising young Irish names showing in London at Fashion East (which showcases up-and-coming brands) or elsewhere, established Irish designers continue to play key roles at London Fashion Week, though absent this year is Sharon Wauchob.

Simone Rocha
The London-based designer will return to the beautiful surroundings of Lancaster House in St James and will no doubt be displaying her usual sure hand when it comes to subversive femininity.

JW Anderson
Jonathan Anderson is another powerful player whose crystal decoration in his spring collection and growing sophistication both in his own brand and that of Loewe, where he is creative director, have won widespread approval.

Richard Malone
The Wexford-born designer continues to play by his own rules and is now exploring augmented reality dressing, having created a sustainable couture dress for Maya James at the Baftas which transformed digitally as she climbed the steps at the Royal Albert Hall.

Richard Quinn
His autumn/winter collection will be highly anticipated given that his last show featured model Erin O Connor and a full orchestra and choir. In the meantime, hehas just created an affordable one-of-a-kind collection for depop aimed at GenZ.

Katie Ann McGuigan
The young talented designer from Newry, whose appropriation of youth subcultures and craftsmanship continue to be a focus of her work, will be showing at Somerset House for the third time.

Paul Costelloe
The London Fashion Week veteran – and still enduring in his love of 1960s style – will be the last Irish player on the catwalk with a presentation in the Waldorf Hotel, his usual location.