Lady Gaga, glamour and gossip: what went on at Paris Fashion Week?

Life was a beach at Chanel, Lady Gaga caused a stir and women were warriors and explorers 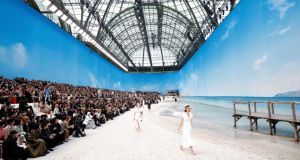 As models, celebrities, designers and journalists from around the world jetted to Paris for its women’s fashion week, they must have had a bumpy landing: the atmosphere was thick with controversy, news of takeovers, and anticipation at new directorial debuts. The proverbial runway was covered in marbles, and everyone was getting their opera glasses out of their Prada handbags to get a good look at who would fall first.

September is the January in fashion, as Candy Pratts Price drawls at the beginning of The September Issue, the documentary tracking the production of American Vogue’s 2007 September edition. The fashion elite trek from New York to London to Milan and, finally, to Paris, all in a month, to view the women’s collections of the most revered designers.

Milan Fashion Week came to a close on Monday, September 24th, just as Paris opened its arrondissements to the well-heeled droves. Donatella Versace waited until Tuesday – perhaps in the hope that most fashion purists would already be in France – to announce that the Italian fashion house would be taken over by none other than Michael Kors.

The fashion world was almost universally aghast at the news of Michael Kors’ takeover of Versace, which is revered as one of the world’s finest independent luxury fashion houses

The fashion world was almost universally aghast at the news. (Think the panicked scenes in Absolutely Fabulous: The Movie when Kate Moss gets pushed into the Thames.) Why? The house of Versace is a family brand, created by Donatella’s brother Gianni, and passed on to her after his assassination, in 1997. It is revered as one of the world’s finest independent luxury fashion houses – the operative word being “independent”.

Huge European conglomerates like LVMH have been hoovering up independent brands, and die-hard fans of Versace see this as a potential corruption of their vision. LVMH alone owns Dior, Celine, Givenchy, Fendi and Marc Jacobs, among others. Apparently aiming for similar domination, Michael Kors last year acquired Jimmy Choo and now will bring the three brands – Kors, Choo, and Versace – under the name Capri Holdings. Kors’ business model in the US is based around saturating the market with fragrances and product partnerships, at price points that are within reach of the average consumer.

This seems like the antithesis of the refined opulence of Versace. It remains to be seen whether the 100 new Versace stores Kors plans to open will dilute the house’s identity, but fashion fanatics on social media certainly seem to think so.

On Tuesday night fashionistas assembled around a magnificent watery dais laid spectacularly beneath the lights of the Eiffel Tower. A striking row of bone-white illuminated palm trees fringed the pool. As the crowd squinted sceptically at the mirrory runway, everyone had the same question, one that was quickly answered: yes, the models were going to walk on water. The Saint Laurent show was the perfect dramatic backdrop for Tuesday’s gossip to sink in – just as the models’ heels sent ripples across the glassy surface, so too did ripples of the takeover news reverberate around the show.

Saint Laurent featured starry, luxurious designs that nodded to the house’s history. But if one theme in the week’s displays was even stronger than history, it was identity. Gender politics were at the forefront of the conversation.

Alexander McQueen, Masha Ma, Louis Vuitton and Leonard Paris all explored the notion of women as warriors and explorers.

Masha Ma took contemporary inspiration from Natalie Portman’s Netflix film Annihilation, in which a group of women venture into an alternate dimension to save the world, to give a feminist edge to her exploration of Chinese aesthetics and politics. The result was a collection dominated by shimmery greens, evoking the jungle and military camouflage. McQueen’s body-armour-esque floral designs also conveyed a warrior woman’s journey, this time around the wilds of England. Ditto Louis Vuitton, but the journey was into outer space. Givenchy and Maison Margiela also engaged with gender, but their interests were in overturning it. Margiela had its first co-ed runway, blending men’s, women’s and nonbinary fashion seamlessly into one genderless celebration. Givenchy also mingled male and female models rendered indistinguishable with cropped hair and androgynous structured suits.

Gender also played into another of the week’s major controversies: Hedi Slimane’s first women’s show as director of Celine. The designer took the reins in January of this year, having previously been creative director of Dior and Saint Laurent. It was he who dropped the Yves and razed the accent from what had been Céline. Many would argue that razing is Slimane’s modus operandi – that he cares little for brand legacy and is happy to leave the earth scorched as long as he can build his own castle on the ashes.

His Celine show was hotly debated in those terms, with many critics angry that he had discarded the feminine point of view in order to align more closely with his own legacy as a men’s designer. (He is best known for revolutionising menswear in his time at Dior Homme.) Lady Gaga seemed pretty happy, though, sitting in the front row. It was she who debuted the first Slimane x Celine bag in front of the Mona Lisa last month.

The other most-talked-about director of the week was Virgil Abloh, who has been the hottest name in fashion this past year. At men’s fashion week in Paris earlier this year, he made his debut as men’s director of Louis Vuitton. His own label, Off-White, had its track-and-field-themed show, in which famous athletes paraded in yellow neon, this women’s week. The star-studded affair featured Bella Hadid, Kendall Jenner and Kaia Gerber, and continued Abloh’s brand of high-fashion street and athleisure wear. Indeed, much of the week could have been viewed through the lens of the streetwear/couture conflict. As Dean Mayo Davies argued for Dazed, Slimane’s show at Celine was a riposte to “streetwear’s stranglehold” on high fashion.

Chanel by the sea

Other highlights of the week included the Chanel show, where barefoot models frolicked on the sand in Le Grand Palais, wearing surprisingly bombastic and fun designs, all bearing brazenly large CHA-NEL lettering.

If Chanel took you to the seaside, Shiatzy Chen took you down the rabbit hole. Think Alice’s Adventures in Wonderland but in “the fantasy world of the East”.

The Balenciaga show invited you into virtual reality in an LED tunnel. Its stiff, futuristic tailoring combined with colourfully exploded Comic Sans type was as if the MSN generation entered the world of The Matrix.

Sci-fi didn’t stop there: the Louis Vuitton show closed the week in the Louvre courtyard, teleporting everyone to Mars with its space-travel theme.

Phew! That’s quite enough trekking – until men’s fashion week, in January, when the heels will wear trenches from Palais de Tokyo to Grand Palais all over again.

Make-up for Valentine’s Day: a good pink will brighten every skin tone

If exercise came in the form of pills, we’d be queueing up for them
9