‘[Fascinator] sounds like a dodgy sex toy. It’s a headband with a floppy flower in it’ 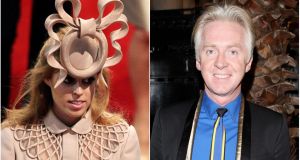 Princess Beatrice wearing a Philip Treacy headpiece. Treacy has said he thought he would end up with his ‘head on a spike’ for his design. Photograph: PA

Irish hat-maker Philip Treacy has said he thought he would end up with his “head on a spike” for his design worn by Princess Beatrice at the royal wedding in 2011.

The Irish milliner (51) who has crafted distinctive headwear for the likes of Madonna, Lady Gaga and Grace Jones, also said a fascinator sounds “like a dodgy sex toy”.

Speaking to Radio 4’s Desert Island Discs, he said the annual Royal Ascot horse races were like “Christmas” due to the popularity of his designs among a number of high-profile guests.

He told the show’s host Kirsty Young: “Royal Ascot makes our year, so last week was Christmas for us.

“People have to wear a hat, they can’t wear an excuse for a hat — that dreaded word fascinator.

“It sounds like a dodgy sex toy. It’s a headband with a floppy flower in it.”

Mentored alongside Alexander McQueen by fashion magazine editor Isabella Blow, Treacy has become known for bold designs, but also credits the support of his late father in Ireland for his success.

The designer, who has worked for houses such as Ralph Lauren and Givenchy, has said he considers hats to be a symbol of rebellion and has made pieces for the House of Windsor and red-carpet royalty.

He described the backlash against the distinctive, towering “Pretzel” design made for Princess Beatrice in 2011, worn at the wedding of the Duke and Duchess of Cambridge.

He told Young: “There was a moment where I thought I would find myself with my head on a spike outside the Tower of London.

“But it was a very modern hat and modernity is always unusual things.”

Treacy, who was inspired to go into hat making by the weddings he witnessed as a child in a village church, credits the support of his late father, a baker, in rural Ireland for his success.

“I have come from a very humble background, I have made hats for kings and queens,” said Treacy, who recalled making clothes for dolls when he was a child.

“One of the strongest memories I have is being in somebody’s house and my father’s friend saying ‘don’t you think that’s a little odd, don’t you think it’s a bit strange this child is doing this?’

“And I remember distinctly my father saying: ‘Whatever makes him happy’. It moves me still.”

He revealed he would take a sewing thimble with him as his luxury item to the desert island.

Treacy also spoke candidly to Young about how he has overcome some of the losses in his life with the help of close friend and eccentric collaborator Grace Jones.

“If you told somebody you were getting advice from Grace Jones they would probably tell you you need your head examined,” said Treacy.