After the Met Gala, the activist has given two key exhibits to a pioneering museum show 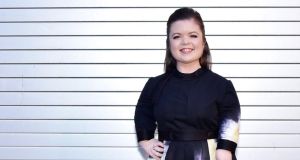 One of the rumours that swirls around the disabled activist, advocate, educator, Vogue contributing editor and lifelong fashion obsessive Sinéad Burke is that she has a complete Burberry wardrobe. Not a collection tailor-made for her but clothes personally selected off the rack by Burke and then customised for her 104cm (3ft 5in) frame. The truth turns out to be even better than the gossip.

“I’m very fortunate to have a wardrobe full of beautiful, well-made clothes,” she says. “Not just from Burberry but Gucci, Prada, Ferragamo, Christopher Kane… As a teenager I’m not sure I could even have visualised it.”

As the eldest of five children, she grew up “envious of my sisters, who were average height. They had access to what I saw as the entirety of the fashion industry, even though they had far less interest than I did.” And now? “They look at my wardrobe and are like: ‘Would that fit me?’” She laughs.

Tim Burke took these huge scissors and cut the coat around me. It was the most explicit demonstration of what I need as a little person and my relationship with the fashion industry

We meet at the National Museum of Scotland, in Edinburgh, where an exhibition to celebrate diversity in fashion – billed as the first of its kind – will feature two pieces from that hard-won wardrobe. First, a Burberry trenchcoat that the British fashion photographer Tim Walker cut to size for a shoot last year, when she graced the cover of the industry magazine Business of Fashion. “He took these massive scissors and cut it around me,” Burke explains. “It was the most explicit demonstration of what I need as a little person and the relationship I have with the fashion industry… It wasn’t about hindering. It was about making something new.”

The second piece is by Kane, who like most designers – whether for clothes or chairs – had never designed for a little person. “We talked about proportions,” Burke says. Such as the fact that her condition, achondroplasia, the most common form of restricted growth, results in wider hips and curvature of the spine, which means hemlines ride up her back. “All you need to do is add two inches at the back, which looks uneven on a hanger but sits perfectly on me. How many other people with wider hips might benefit from an alteration like this?” she says.

The point Burke is making here, and in her 2017 Ted talk – Why design should include everyone – the one that kickstarted her stratospheric rise, is that greater inclusion is good for everyone and that people from diverse backgrounds need to be present at every stage. This is what led to that Burberry wardrobe, a place on Vogue’s 2018 list of the 25 most powerful women working in Britain, an appointment to Ireland’s Council of State, and an invitation to the Met Gala, in New York, where this year she became the first little person ever to attend the fashion bash.

Today she is wearing a navy jumpsuit (“River Island children’s department, age nine to 10. My mam picked it out for me… And the loafers are Gucci.”) The zip is, as usual, on the back. “I love jumpsuits, but functionally they are incredibly difficult. If I go to the bathroom I have to make myself vulnerable in a public place, because you have to almost expose yourself fully… That’s if I can reach the zip. And it’s not just because I’m a little person. Many people cannot get dresses on or off with independence. Clearly, they were designed by a person who did not wear them.”

She goes on to describe “the excruciating business” of using public lavatories, where locks, sinks, soap dispensers and hand dryers are all “out of my reach”. She talks about turning upended bins into precarious stools to reach locks or depending on the kindness of strangers to stand guard. The bathroom, of course, is only one example “where design impinges on my dignity”.

Burke is seated at the museum cafe when I arrive. We order lunch, and she asks me to pass her water and cutlery, both of which have been placed just beyond her reach. She has just flown in from Ireland, where she lives with her parents in Navan, in Co Meath. After our interview, a quick salon blow-dry of her signature bob and a photoshoot, she will head to London, where, over the past three months, she has been engaged in the pioneering work of making the world’s first mannequin of a little person out of her own body for the exhibition.

“It’s amazing how vulnerable you feel,” she says. “I’ve never seen the physicality of my body manifested like that before. When I first saw my legs I was, like, ‘Is that really the size of my hips?’” She laughs, then gets serious. “That’s the power of representation. This is new for everyone. And now it exists.”

She has been obsessed with fashion for as long as she can remember. Growing up, she asked for the September issue of American Vogue for birthdays even though it was too heavy for her to lift.

Why was she drawn to an industry that neither represented her nor included her in its ludicrously narrow beauty standards? “It was because I felt left out,” she explains. “I understood that the fashion industry had power and that access to better clothes would alleviate some of the challenges I experienced. I use clothes like armour. If I’m walking down the street in a jumpsuit with caped sleeves and loafers, you probably won’t think I’m a lost child who needs help finding their parent. Despite it being seen as an exclusive industry, I see fashion as something that unites us.”

Her father, unlike her mother and siblings, is also a little person. In 1998 her parents founded Little People of Ireland, a national charity that offers support and education to little people and their families. “Growing up, that notion of visibility and representation was so innate to me, I didn’t even understand the value of it,” she says. “My disability was always explained as: ‘You’re just like your dad.’ That had power.”

She did briefly consider a painful limb-lengthening procedure before realising that “I was only getting it done to make people like me more easily.” Instead, aged 11, she turned to her parents and said: “If people don’t like me because I’m 3ft 5in, it’s not my problem.”

For most of her 20s Burke was a primary-school teacher. “Lots of people had concerns about how I would control the children,” she says. “That’s such a negative way to look at teaching. Even though the children were bigger than me, my attitude was that if I offered respect to them, I would receive it. And I did.”

If you are in any way diverse, there is a sense that it’s your responsibility to educate the majority. That’s not fair or true. I choose to do this, and I choose it for now

Education remains her abiding passion. Recently, she was the victim of a hate crime in which a teenage boy leapfrogged over her on a Dublin street while another filmed it. Her response? To write an opinion piece for Vogue in which she vowed she would speak to every primary-school child in the region.

Has she done it yet? “Yeah! I’ve done them all,” she says. “We’re hoping to do the older schools next year.” Doesn’t she find constantly having to be the educator of her own life exhausting? “Absolutely,” she says. “If you are in any way diverse, there is a sense that it’s your responsibility to educate the majority. That’s not fair or true. I choose to do this, and I choose it for now.”

It was at a Burberry fashion show, five seasons ago, that Burke found herself seated next to Edward Enninful, editor-in-chief of British Vogue. “I texted my best friend, who said: ‘Do not let him leave without saying hello.’ To which I replied: ‘Obviously!’”

At the end of the show Burke “tugged on the sleeve of his jacket” and delivered the monologue she had been silently rehearsing about how accessibility in fashion needs to be part of the repertoire rather than being locked in what she calls a “framework of impossibility”. Her confidence is awesome. Burke has similar stories of bouncing up to Cate Blanchett, Jacinda Ardern – whom she bumped into in a corridor at Davos and asked out for coffee – and Anna Wintour to introduce herself and her master plan. Which is nothing less than infiltrating the ivory towers of fashion and design and shaking them up from the inside.

“I’m deliberately trying to place myself in the upper echelons of the fashion industry because that’s where change happens,” Burke says before heading off to have her torso encased in plaster for four hours. “I want to tilt the lens.” – Guardian

Body Beautiful: Diversity on the Catwalk runs from Thursday, May 23rd, to Sunday, October 20th, at the National Museum of Scotland, in Edinburgh. Admission is free