Great for Zoom calls, collars are growing in size, colour and popularity 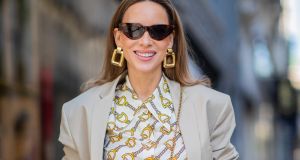 The oversize collar trend that emerged in spring has developed surprising staying power and has become one of winter’s most striking statements. “It has turned out to be not just fleeting,” says fan Sarah Macken, editor of Irish Tatler magazine whose white lace collar (by Vita Grace) “is almost halfway down my jumper. But big collars are perfect for Zoom top-half dressing because you look instantly a bit more “done” and they make you feel more structured. And detachable ones can revive a sombre knit,” she says.

These giant collars that concentrate the gaze on the face (and stiffer versions that frame it) have become more decorative and colourful for winter and allow for additional details like brooches. The Duchess of Cambridge photographed on the cover of the Telegraph recently used the collars of a Ghost shirt to display a poppy. On the high street big collars from Ganni and Asos, some in lace, became best sellers while elsewhere those of Miu Miu embellished sweaters, dresses and velvet coats in a very girly – and expensive – way for winter. Exaggerated elegance and dramatic silhouettes are nothing new in fashion.

Some of the prettiest collars are from La Veste, the company founded by Spanish stylist Blanca Miro and designer Maria de la Orden last year with a range of blazers in gingham, animal print and stripes. That flair extended to their collars and so called “school” shirts with the same gaiety and style.

Caitríona Phelan, a Dublin-based fan, is drawn to their playfulness “verging on the ridiculous”, she says. “I like the prim silliness of a smart shirt with an extravagant collar – it is the closest socially acceptable way of wearing something akin to a 17th-century ruff. And it’s part of a larger aesthetic attraction to the 1970s. I wanted a La Veste school shirt as soon as I saw it, but they kept selling out. Also, they are expensive, so I bought it as a treat after a stressful period of work,” she says explaining their attraction. lavestelaveste.com

One particularly lovely Irish site selling vintage maxi collars is I Can Tell By The Moon founded by Vittoria Caprara, an Italian from Salerno living in Ireland for the past 15 years. Her love of French and Italian antique and vintage textiles led her to start selling online – a passion project she calls it – arising from a family love of French literature and visiting French brocantes.

Refreshed every Friday, at the moment the site has a limited-edition collection of maxi collars from Peter Pan style broderie anglaise numbers and those in gossamer fine ecru with lace trim as well as some in tartan. It majors, however, in collections of embroidered blouses and tops, cardigans, some beautiful linen and cotton embroidered nightgowns, slip dresses and smocks. Visit bythemoonvintage.com and be tempted.

With tabletop dressing and Zoom calls dominating working life during lockdown, the big and bold effect of the giant collar blouse on screen is there for the taking. For additional drama, pin on the brooches.