Naturally . . . how to avoid microbead products

Research shows these tiny plastics are pervasive, cropping up on shorelines worldwide 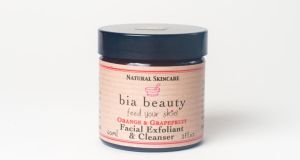 Plastics are everywhere, but I’d bet most of us don’t realise they’re even in our skincare products. For years, cosmetic companies have been adding tiny balls of plastic called microbeads to hundreds of beauty and personal care products such as facial cleansers, body scrubs and toothpastes as exfoliants. So for the sake of flake-free skin and squeaky clean pearly whites, some of us have been rubbing bits of plastic all over ourselves and unwittingly washing them down our bathroom sinks and shower drains.

And because these beads are so small – often less than a millimetre – they often slip through wastewater treatment plants and end up in our lakes and oceans. Research has shown that these tiny plastics are pervasive, cropping up on shorelines and seabeds worldwide, and even in the digestive systems of some fish and other aquatic animals.

A 2013 study by UK researchers looked at the presence of plastic in 10 fish species caught in the English Channel. Of the 504 fish examined, more than a third contained microplastics, which can cause blockages in their guts. Some US states began passing bans on microbeads after a 2013 survey by the University of Wisconsin-Superior and the 5 Gyres Institute found they were turning up in North America’s Great Lakes by the tens of millions. The researchers found 356,000 microbeads in a single tube of a leading facial cleanser.

And if our oceans and lakes turning into plastic soup isn’t enough bad news, here’s more. Studies have shown that pollutants, such as cancer-causing chemicals like PCBs, stick to microbeads, where they can become highly concentrated before the whole lot is scooped up by a fish that mistakes those little blue dots in your toothpaste for a bit of food.

So far we know very little about what all this means for human health, but scientists suggest these pollutants could be making their way back up the food chain to our own dinner plates. What goes around potentially comes around.

Scientists and environmentalists are lobbying companies to remove these unnecessary abrasives from their products, but progress is slow. A few like Johnson & Johnson, Procter & Gamble and Unilever have agreed to phase them out, but are doing so over several years. While we wait for cosmetic companies to change their ways or for governments to ban the use of microbeads outright, plastic pollution is becoming an increasing problem – one that we as consumers can choose not to exacerbate.