After more than 15 washes and a trip to hospital, Tessica Brown’s hair still won’t budge 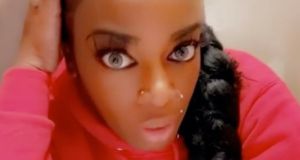 Tessica Brown, whose TikTok about using Gorilla Glue as a hairspray substitute has been watched more than 24 million times

Social media users have been captivated by the plight of a woman named Tessica Brown, her decision to use Gorilla Glue instead of hair spray and a harrowing, monthlong quest to undo a seemingly permanent hairstyle.

It all started when Brown ran out of her usual hair spray, Got2b Glued. In a pinch, she opted to use a different product she had on hand to finish off her hair: Gorilla Spray Adhesive, made by Gorilla Glue.

“Bad, bad, bad idea,” she said in a TikTok posted last week that cautioned others against making the same mistake. After more than 15 washes, various treatments and a trip to the emergency room, her hair still hadn’t moved.

“My hair has been like this for about a month now – it’s not by choice,” she said in the video. Brown’s hair mishap has intrigued internet users who became invested in her predicament and have rooted her on virtually, leaving messages of encouragement and ideas in the comment sections of her posts.

Her original video has been viewed more than 24 million times on TikTok and more than 3 million times on Instagram, and has been widely shared across other social platforms. The situation has elicited communal cringes and sympathy for Brown, who has become known as the Gorilla Glue Girl, as days have passed and various remedies failed to help.

“You have to keep us updated,” one user commented under her Instagram post. “I’m too invested now. I’m going on the journey with you.” Brown has brought her followers along with her through several attempts to “get rid of this forever ponytail” as she described it on Instagram. In a second video, Brown demonstrated an attempt to wash it out: She filled her palm with a generous amount of shampoo, slathered it over her head and rubbed furiously. She wiped off the suds, which did not appear to have penetrated the glue layer, and seemed to be close to tears.

She later posted on Instagram that a combination of tea tree oil and coconut oil that she left on her head overnight was an “epic fail”.

“This is the life I’m living at this moment,” she said in the video. “This is the life that I guess I’m going to have to live.” Some users suggested natural remedies, many involving apple cider vinegar or various rubbing alcohol or acetone concoctions. A woman who identified herself as a licensed stylist suggested applying glycerin to her hair, letting it sit about 30 minutes and then massaging it to loosen the glue.

“We are very sorry to hear about the unfortunate incident that Miss Brown experienced using our Spray Adhesive on her hair,” Gorilla Glue said in a statement Sunday. It called what happened a “unique situation” because the product was not intended to be used “in or on hair” because it is considered permanent.

“We are glad to see in her recent video that Miss Brown has received medical treatment from her local medical facility and wish her the best,” it said. On Saturday, Brown posted a video of the St. Bernard Parish Hospital in Chalmette, Louisiana, and shared a photo of herself on a hospital bed. A later video showed another woman, a TikTok user named Juanita Brown, applying acetone and sterile water to Tessica Brown’s head.

It was unclear if the treatment worked. Skin and hair experts have weighed in on TikTok and other social media platforms with suggestions. Tierra Milton, the owner of She and Her Hair Studio on Staten Island, said that if someone in Brown’s predicament walked into her salon, she would likely recommend that she shave her head.

“I wouldn’t even try to salvage it because we’re talking about an industrial product that is used for other purposes besides hair,” Milton said. “Women all across the board, all walks of life, should seek professional help when it comes to hair care regimens.”

Dr Dustin Portela, a dermatologist, suggested starting with acetone to break down the glue, or using Goo Gone, a product that helps remove bandages and adhesives. Coconut oil, sunflower oil or Vaseline warmed in hot water could also work, he said, but he added that solutions should be tested on a small area first.

“Obviously Gorilla Glue is designed – and any super glue – not to wash out easily with soap and water,” he said. “They formulate the product with bonds to withstand the most common types of things, so I knew she was going to have an incredibly difficult time.”

Adhesives like Gorilla Glue are not meant to be used on skin, Portela said. They can be irritating and could cause rashes like contact dermatitis. If all else fails, he said, going to a salon to have her head shaved might be the best solution.

“I think there’d be a lot of anxiety that anybody would have if they were in that situation,” he said. “Now more than ever we just need to have compassion for people and try to help them. And she deserves all the help she can get right now because it’s a really unfortunate situation.” – New York Times