Asos plans to ban mohair, cashmere and silk from next year 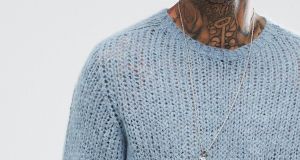 An example of a garment containing mohair currently for sale on Asos.com

Asos - the second biggest clothing site in the UK, with 64.4 million visitors in the six months to May 2018 - has pledged to ban silk, mohair, cashmere and feathers from its site from January 2019.

In addition, products using down, teeth and bone - including mother-of-pearl, which is taken from the shell of some molluscs - also fall under the planned ban.

Peta, the animal rights organisation, came out in support of Asos’s move to update its animal welfare policy. “The global online retail platform is reflecting a profound shift in public attitudes towards the rearing and killing of animals for fashion,” said Peta UK’s director, Elisa Allen.

“Consumers are changing the face of the industry by demanding that designers and retailers offer clothing and accessories that look beautiful without harming animals.”

Asos’s policy states the site’s point of view: “Asos firmly believes it is not acceptable for animals to suffer in the name of fashion or cosmetics.

“Asos is committed to working with industry expert groups to support the ongoing research, development and implementation of animal welfare standards and transparency in the leather supply chain.”

The materials in question are believed to have an impact on the animals concerned. Some cashmere goats are said to be the subject of enforced winter shearings meaning they are exposed to harsh temperatures, while it is believed that some angora goats are mutilated to produce fluffy mohair.

The production of silk has seen manufacturers boiling silk worms inside their cocoons.

Asos follows Zara, H&M and Topshop, who all pledged last month to stop using mohair, but takes this further.

Allen hopes it is the start of something bigger. “It surely can’t be long until we see a well-known fashion retailer also ditch leather and wool and go 100 per cent vegan,” she said. “That’s a move that is sure to garner international plaudits and attract compassionate consumers in their droves.”

Asos’s announcement is part of a wider trend in fashion towards a more conscious use of animal products. At the high-fashion level, Gucci, Michael Kors and Versace have all pledged to go fur-free in the last year. Gucci CEO Marco Bizzarri commented: “I don’t think it’s still modern and that’s the reason why we decided not to do that.”

The next step may be the sale of fur banned in the UK. After 110,000 people signed a petition, the issue was debated in parliament this month.–Guardian Service