In the absence of subsidies, Irish childcare costs are among the world’s most expensive 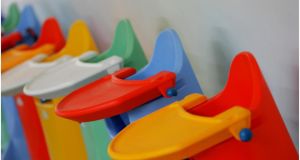 The high cost of childcare is creating immense problems for many Irish parents. It is causing stress, preventing parents from working and driving them into the unregulated world of paid childminders.

All these factors emerge in the Irish Times Ipsos MRBI Family Values poll, which examines current childcare arrangements, among other subjects.

The results show only a fifth of children being cared for in creches. A large majority of parents now use informal childcare arrangements, such as grandparents, family members, friends or neighbour and childminders.

Ironically, all our public policies on early years care are geared towards the minority of children in creches or preschools. These settings are increasingly regulated with a curriculum and minimum education requirements for staff to help ensure they deliver high-quality early years care.

Long-term studies show that every euro invested in this type of quality care can involved a sevenfold return in terms of improved outcomes for children. But in the absence of State subsidies – apart from the free pre-school year – childcare costs in Ireland are among the most expensive in the world.

These high fees equate to a second mortgage for many. OECD figures, for example, show that childcare fees paid by a low-income, dual-earner family in Ireland with two young children take up 35 per cent of family net income.

It’s little surprise, then, that childminding and other informal care – which is typically much cheaper – remains far more popular.

The Government has pledged to draw up measures to address the cost of care later this year, but it remains to be seen what kind of meaningful steps it can take to ease the burden on parents in the short term.

Extending the free preschool year by another year is likely to cost about €170 million, a sum which the Government insists is too expensive in a climate of restrained public spending.

The other options for the Government are tax credits on childcare expenditure, or targeted subvention for lower-income families.

Tax credits would most likely be the more popular move and provide immediate relief to hard-pressed families. But many policymakers and child development experts say they would disproportionately benefit high-earners, do little for low income families, and squander vital resources that could be used to improve quality childcare services.

Start Strong, which campaigns for better early years services, says we should focus on extending the number of subsidised places available through existing schemes in areas of disadvantage and improve the quality of care.

Many child development experts have concerns about childminding, given the lack of regulation, minimum educational standards, supervision or Garda vetting.

While groups such as Childminding Ireland say they are in favour of regulation, they are also keen to defend the benefits of more informal care. “Childminding is comforting,” says a spokeswoman for Childminding Ireland. “It’s a home-from-home type care, which quite often replicates the type of care parents would like to give if they were in a position to be at home with their children.

“Children will benefit from being in a home-from-home family environment, with continuous care from the same individual, often from babyhood through the school years, as most childminders provide school-age care.”

She points out that registered members with Childminding Ireland are insured and Garda-vetted.

The secrets to growing an exotic Irish garden
5