Almost 20 years ago, after a bitter debate, Ireland voted for the introduction of divorce. Almost 100,000 people have availed of the law since then. How have they fared, and what’s life like after marriage breakdown? 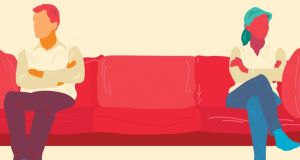 Earlier this week, the Government announced its intention to hold a referendum in May, with the intention of reducing the waiting time for divorce to two years Illustration: Dearbhla Kelly

With nearly one in ten marriages here ending in separation or divorce, Ireland has the lowest rate of divorce in Europe and the third lowest in the world, after Mexico and Chile.

It is almost 20 years since the country voted, by 51 per cent to 49, to remove its constitutional ban on divorce. The referendum was in November 1995; legislation followed in June 1996. Years of debate had preceded the referendum, and the campaign was a divisive one, with the No side narrowing the gap in the days before the poll.

In a last-ditch effort to persuade women to vote Yes, Joan Burton, who was then the Labour Party’s minister of state at the Department of Foreign Affairs, pleaded for “the small voice of honesty and truthfulness, however painful” and said that civil divorce was “a more honourable and honest process” than annulment, which declared that the marriage had never existed at all.

Prof William Binchy, arguing for a No vote at the Anti-Divorce Campaign’s final press conference before the ballot, warned that “the proposed amendment would remove constitutional protection from the first family in favour of the second partner following a divorce”.

Binchy added that “the amendment would reward deserters, leaving abandoned wives in a perilous financial position; that it would require the premature sale of the family home or business; and that it would enable quickie divorces by allowing a divorce to be obtained when the spouses were still living in the same home”, allowing these deserters to “scoop the pool of the family assets”, resulting in poverty for abandoned wives, who were better protected under the existing law covering separation.

“Hello Divorce . . . Bye Bye Daddy . . .” read some of the anti-divorce posters, implying that more fathers would abandon their families.

Some of the No campaign’s fears have come to pass. Separation and divorce can plunge families into poverty; yes, some people are forced to sell their homes; and, yes, some women become so embittered towards their exes that they deny child visitation to the fathers – a twist on the warning.

But Irish society decided in the end to face the painful truth of the marriage breakdown that was already happening. The intervening years have shown that the Irish are slow to divorce and are not jumping from one marriage to the next.

Nuala Deering, a psychotherapist and couples counsellor at Relationships Ireland, who voted in favour of divorce in 1995, says: “It was a very difficult time then. People were very fearful of divorce undermining the family and relationships, and the church was very anti-divorce. We haven’t seen the huge increase in the number of divorces that was feared. Having the option of divorce can actually be a good thing, because when people marry they don’t want to have to ever take that option, so they are more likely to make good decisions.”

People in their 20s and 30s have grown up with the option of divorce, yet people continue to marry in large numbers – with 23,000 marriages last year plus nearly 1,500 civil ceremonies. In 2012 the marriage rate was 4.6 per cent, higher than it was at the time of the referendum (4.3 per cent).

“Irish society cherishes the family, and no one salutes the introduction of divorce,” Mervyn Taylor, as minister for equality and law reform, said as the Oireachtas cleared the divorce Bill, in 1996 .

Taylor’s words still ring true; as John Farrelly, a marriage-counselling expert, says, “Nobody gets married while eagerly anticipating a divorce in their future.” Yet for those who have married and for compelling reasons need to get out of it, the ghosts of the 1995 campaign continue to affect their lives.

The legislation made divorce extremely difficult, says Farrelly, who has counselled thousands of married couples in difficulty during his time as director of the Catholic marriage-counselling agency Accord. The very existence of this State-funded counselling agency was part of the social remedy that the government promised to help minimise what many saw as the social scourge of divorce.

“We are draconian still,” says Farrelly, “and we are forcing couples down a punishing legal route compared to other countries. Irish divorce was designed for 20 years ago, when people were afraid that divorce would be the scourge of society.”

Then and now, marital commitment and the willingness to put up with unhappiness in order to stay married are in the Irish DNA, Farrelly believes. “People stay married for many years longer than they should. They’ve driven each other mad and are at the point of losing their minds by the time they consider divorce,” he says.

A series of articles by Carol Coulter in The Irish Times in 1995 was deeply influential in its portrayal of women in horrendous circumstances of abuse, abandonment and financial distress. Twenty years later divorce hasn’t prevented such situations, but it has opened the possibility of starting afresh with the support of court orders. That doesn’t mean it has become easy.

“It takes so long – four to five years. The Irish divorce is actually the barring order, which can go on for years and undermines the possibility of ending the marriage in a more positive way,” says Brendan Madden, a psychotherapist and former director of Relationships Ireland, which offers couples and family counselling.

“Quite a number of separations don’t proceed to full divorce,” he adds. This is demonstrated by the figures: there are roughly as many separated people as there are divorced people.

Before divorce was introduced, separating couples relied on legislation from 1989 and 1995 which provides for judicial and legal separations, allowing parties to separate and empowering the courts to make far-reaching orders on assets, child access and other contentious issues.

Most of the legal work in a divorce is done during the judicial separation, and the more conflicts arise, the more it can cost. Divorce itself, which can cost as little as €500 and is a more straightforward process, allows people to remarry.

A spouse may apply for a judicial separation after one year of proven marriage breakdown. But it takes at least another three years to proceed to divorce. By this time a contentious and enduring legal quagmire can make ex-couples more estranged than they need to be, Brendan Madden believes. “It takes too long to get closure. The whole situation in Ireland is messed up compared to the UK – it’s a bit nuts.”

Rachel Fehily, a barrister, author and family-law mediator, says: “People may be legally separated and stay living under the same roof unhappily, or they stay in a relationship that is unhealthy for much longer than they should, sometimes because they are encouraged by lawyers to stay.

“Because if you move out it’s to your detriment financially. And you can’t force the other person to leave unless you get a barring order.”

Financial predicaments, compounded by high legal fees – separation and divorce can cost anything from €500 for a DIY divorce to €100,000 for a highly contested one – can make it almost impossible for couples to let go of one another, especially when separating couples cannot afford separate homes.

“I can’t afford more legal fees to qualify for a divorce,” says Alison, who is in her late 40s and has been legally separated for several years. “It’s not worth the money and the hassle unless he’s a millionaire, or you have another man who wants to marry you.”

Aoife, who is in her early 40s and happily remarried, sees far more friends staying married even though they are unhappy. “It’s the old-fashioned Irish habit of sticking it out. I know quite a lot of people who are living separate lives under the same roof, for financial reasons as well as the children,” she says.

Couples without children may find divorce a little easier, although the process is still painful. “The loneliness is crippling,” says James about his divorce after six months of marriage. “Sometimes I have a forlorn sense I will never meet that special companion.”

Divorce hurts. Even when couples manage to overcome financial, housing and childcare difficulties and proceed to divorce, they may still not be free of one another.

“There’s no such thing as full and final settlement,” says Fehily. “A huge amount of men return to the court to argue that they can’t pay the maintenance figure any more. It’s hard for a woman in her 50s to get on to the job market, but the judge may say, ‘Why can’t you get a job in Tesco?’ You are free and yet not free.”

Also, she says, “I see a huge amount of emotional abuse and controlling behaviour by ex-spouses, usually by ex-husbands over ex-wives who had no financial rights during the course of the marriage.

“During the marriage the person who is working has no obligation to give the nonworking spouse any money. I’ve had clients who had to ask for pocket money and didn’t have their own bank accounts. There are a lot of women in that situation, and some men.”

Nuala Deering, the Relationships Ireland counsellor, says: “Some people are very bitter 15 years on – usually due to a massive, incredible conflict over [child] access . . . It’s more likely to be the man who keeps that bitterness. It becomes his identity and part of who he is. He is acting out because he is still part of his ex-partner’s life as long as he is difficult, and that’s because he hasn’t faced up to the reality that the marriage is over.”

The current laws around divorce make it a hard climb, but that doesn’t mean it isn’t worthwhile. “Divorce is not a failure,” says Deering, who has seen it be a positive event for many people.

Fehily agrees. “I’ve seen people go from being stuck in a rut to coming out of the divorce process with a burst of energy. People get stuck in dysfunctional relationships, and they need to grow up and transform their lives.”