The Irish Times is on the hunt for Ireland's best 99. Share your photos and stories with the hashtag #best99 or email best99@irishtimes.com. The winner will be announced on the 21st of August 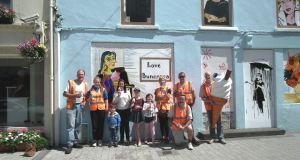 Is the best 99 in Buncrana? 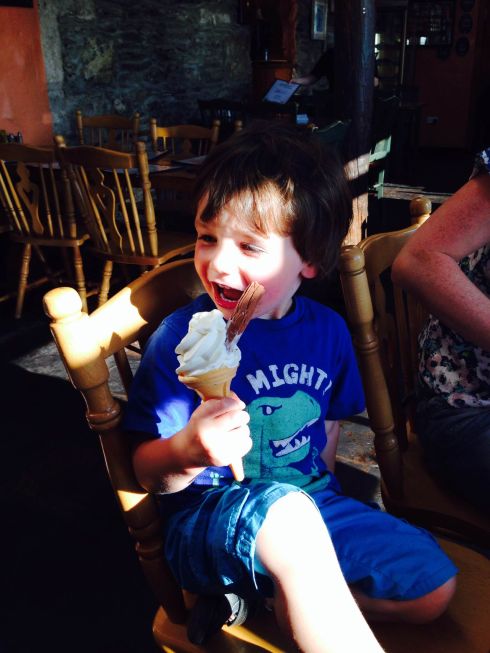 The village shop, Ballinascarthy, Co Cork.
The best 99 comes from The village shop, Ballinascarthy, Co Cork. We just spent 2 weeks near there. Nearly every day we went to the shop for cones, The photo was taken on Saturday evening after The Ballinascarthy Community Festival dog show. That day we had cones earlier in the day but had seconds to celebrate Bronwen's rosette. Bronwen loves cones but can't have a 99 as dogs shouldn't have chocolate. I don't think the shop staff realised one of the cones every day was for a dog. We had to wait for the machine to start up one day! and it was worth the wait.

Buncrana Ice Cream Shop, Buncrana
Here is a picture of local Buncrana people enjoying the best 99 ice cream in the country. It is called ‘Pink and White 99’s’ and people come from all over the counties of Donegal and Derry to enjoy this gorgeous treat!

There is nothing better than getting a delicious creamy ice cream and going for a stroll along the beautiful beach side and enjoying the views of the Lough Swilly, and the historic Father’s Hegarty’s Rock.

This photograph is taking beside the ice cream shop where local artist Rois Davis has painted a mural of famous paintings with a Buncrana twist including the renowned ‘pink and whites’.

"At the end of every day, after the takings are counted into cloth money bags, I help granda lift the three old wooden shutters into place in front of his butcher shop display window. We climb into his old brown Volvo, the worn hide seats warmed by the high summer sun. Through the walled city gates, the ancient stones baked, we make our usual way home.

Like clockwork, the same time, every day, we pull up outside the Italian's ice cream parlour just before he closes his own doors. Coins drop like keys from granda's hand into mine. Two 99s, he gives the order. There were once Macaris, Yanarellis and Battistis dispensing happiness on these streets. Only Sonny Fiorentini remains, still in his white apron, still always whistling.  Legends are whispered about the secrecy of the family recipe.

My head cranes over the high counter to watch the daily ritual. The spatula hypnotically smoothes through the day's last batch and the alchemist curves out a scoop for the waiting cone. It is dressed in a flimsy napkin cloak and a thick chocolate flake is thumbed into place.

Back in the car, it is unsaid but agreed that no-one need know about such an indulgence so close to tea-time. And every day, as if saying it for the first time, he opens up again about his old man dream.

"One of these days," he repeats, punctuating every few words with a lick of his hard-earned ice cream. "Sonny's going to lock the door behind us…" The day's work melts away in the evening sun. "He's going to say 'boys'," his cone a conductor's baton and I hanging on every note I've heard so many times before. 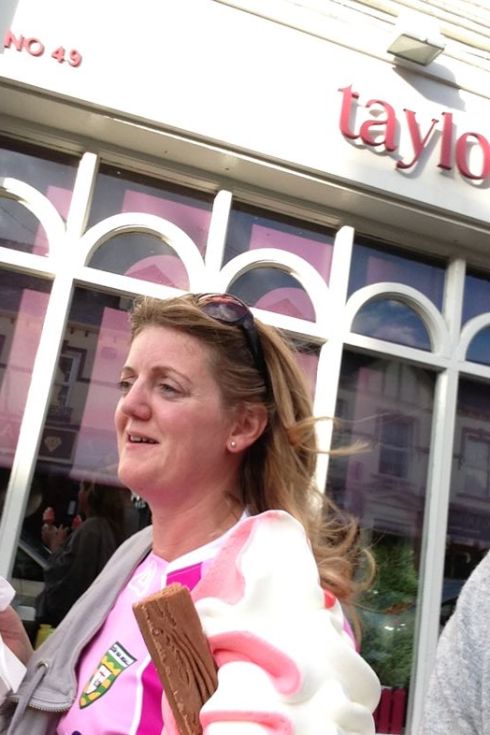 John O'Donnell's, Buncrana
John O'Donnell's in Buncrana has the best 99 in the world. Pink and white ice-cream, excellent texture and no artificially sweet, loads-of-sugar flavour. Sauce optional of course but you have to go with the auld flake.

I've a picture here of my wife in her pink Donegal Jersey blending in nicely with my ice-cream. She won't appreciate it but I think they both look lovely....

Teddy's, Dún Laoghaire
I must tell you about our weekly visit to Teddy's on the front in Sandycove. When I came to Dublin first as a 18 yr old from Cobh Co Cork I fell in love with a guy who became my husband who every Sunday brought me to Teddy's for a huge 99.we used to sit on the wall in front of the shop and by gosh licking the most delicious ice cream. Then we had two kids and then each week travelling from Kildare to get our 99 was a big thrill.

So on the years went and now my daughter arrives back from San Francisco and says we must get a 99 from Teddy's. Last Sunday I went to Teddy's and I saw an elderly man sitting on the step with two little dogs and two ice creams holding one for himself and the other for the dogs. A kind old gentleman treating his dogs and himself to the best 99 in the country. Even the dogs are licking the cones so what does that say.....the best 99.Happy memories and after 40 years we are still travelling 20 miles for the best 99.

Teddy's, Dún Laoghaire
Teddy's in Dún Laoghaire have always done the best whipped ice cream and that is a fact. To queue outside that magical hatch in the 1970s on a hot Irish Summer's Day was a magical experience.

If it was raining, my three sisters and I would walk briskly with our precious haul back to the car situated in the car park opposite Teddy's.  You couldn't risk running. The car would be facing the sea looking towards the the hill of Howth in the distance (often shrouded by mist).

My mother and father would be sitting in the front and us girls in the back.  Sometimes, I don't know how they could be so selfless, my mother or father felt unable to finish their whipped cone and they would pass the remainder to one of the greedy guts who had already finished hers sitting behind them.

On a 99 day, and it was usually a 99 day, I would leave the chocolate flake embedded in my ice cream for as long as possible to chill. I would nibble delicately at the top so flakes of chocolate fell into the ice cream and into my lap.  I would lick around but eventually bow to inevitability, take it out and gobble it.  Then, with the chocolate gone and when the crowning glory of the ice cream was licked into oblivion, I would suck tiny amounts of ice cream still left in the little compartments at the rim of the golden wafer one by one.

At this point I felt rather fatalistic.  I didn't enjoy the last part of the ice cream as much as I should have because the headiness of the first part of the experience was over.  Now I was under a bit of black cloud because the whole nirvana like episode had nearly finished, the supply of the precious white stuff had nearly run out.  As you reached the very end, smooth, point of the wafer you came across a slightly pointless zone that was just full of air.  The actual ice cream never reached all the way down. You never knew exactly in advance how far it would go, it depended on the pulling skills of the relevant Teddy's person who had served you.

However, as I explained, if they were in generous mood, you might get to finish my mum's or dad's as a sort of consolation prize. Ice cream has been a constant in my life including the non-whipped kind.  I attach a poem which describes my devotion...

I have fallen victim to ice cream,
It’s all I want to eat,
I’d like to have it all the time
And not just for a treat.

Keep your chocolate bars and sweets,
Have your silly old cake,
I’m not partial to other sweetmeats,
I crave an ice cream headache.

Vanilla is my favourite flavour
So, if at lunch I’m curt,
Please, excuse my bad behaviour -
I’m thinking about dessert.