Alpine trek: the end of a journey only a bicycle could make possible

As a school boy,I was fascinated by the Tour de France, and now I’m taking on four of its toughest climbs 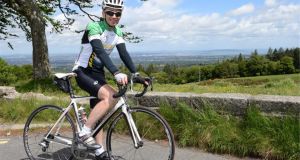 First things first . . . please don’t call me a Mamil (middle-aged man in lycra). Admittedly, I’m middle-aged. And yes, I wear lycra (though only when cycling). But the somewhat derogatory acronym seems a little unfair when applied to someone who bought his first cycling shorts long before most people had ever heard of lycra.

It was 1979, and it was a time when cycling clothing was a little more, well, utilitarian. Shorts were nominally made of wool, though the texture resembled horse hair; shoes came with wooden soles; and helmets consisted of strips of foam. But that was largely academic because they were seldom worn anyway.

I was 14 and, as a new member of Waterford Cycling Club, I was about to compete in my first cycle race. The cycling bug had bitten a few years earlier, shortly after the arrival of multi-channel television, just in time for the 1976 Montreal Olympics. With the choice of all four channels came ITV’s World of Sport presented by Dickie Davis. And with that came the Tour de France.

It was my first introduction to a phenomenon that seemed both extraordinarily exotic yet strangely relevant. The scale of the endeavour was almost incomprehensible. But one of the top teams was co-sponsored by Raleigh and the presence of the then ubiquitous bike brand appeared to make the whole circus more accessible.

The magic mountain
Standing out amid the tour’s sweat and spectacle was a special mountain. The Alpe d’Huez, via its 21 hairpin bends, appeared to encapsulate the magic of the event. It would have been inconceivable to me back then that I would ever cycle it but, more than 30 years later, that’s what I plan to do on July 6th – and not only the Alpe. I will be tackling it and three more of the highest Tour de France mountain peaks in the Marmotte one-day cycle.

The annual event – named after an animal of the same name that lives in the Alps – is 173km long and attracts thousands of entries from around the world. But the challenge is not distance. It’s the combined total of more than 5,000m of climbing. Rolling out of Bourg d’Oisan at the base of Alpe d’Huez, the route takes in the 23km long Glandon (average gradient 5 per cent), the 12km long Telegraph (average 7 per cent), the Galibier, which is 18km long with an average gradient of 7 per cent, and finally finishes at the top of Alpe d’Huez (13km at 8 per cent).

Throw in a few other long drags, some tricky high-speed descents (the Galibier alone lasts nearly an hour) and the vagaries of Alpine weather, and you’ve got one of the toughest cycling challenges imaginable.

Assuming I complete the route, it will be the end of a long road – figuratively as well as literally. I retired from racing in my early 20s but returned to the bike a decade ago as a leisure cyclist, most recently with Orwell Wheelers in Dublin. Since October I’ve ridden 5,000km in preparation for the Marmotte and suffered my way through two spinning sessions a week under Andy Kenny’s forceful direction in Ballsbridge, Dublin.

With just a few weeks to go, it seems a little unreal to be so close to fulfilling a dream and, no doubt, there will be some emotion on the day.

Buried deep in my garage is the first lightweight racing bike bought for me by my parents. They’re gone now but the memories prevail, and cycling is a common denominator in many of them.

With that in mind, my friend John Hannin (who rode the Marmotte last year) assures me that I will shed a tear when I finally crest the Alpe. Whatever about that, cycling will enable a 48-year-old who perhaps should know better to recapture something of the wide-eyed schoolboy watching the Tour de France for the first time.

That’s quite a journey and one only a bicycle could make possible.