Brexit may curtail my lecturing career in the UK

UK and Irish academia offer similar ethos and salaries, but there are fewer jobs at home 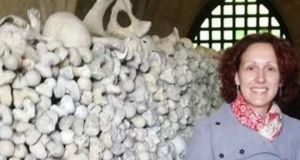 A career in anthropology has taken Geraldine Fahy to the Lebanon, Kosovo, the Netherlands and Belgium, but she is now based at the University of Kent,  where she lecturers in biological anthropology.

Why did you decide to leave?

I really wanted to study forensic science and at the time there was only one course available in Ireland – and it had just started the year before – so I applied to an English university instead. I moved to Lincoln by myself for three years when I was 18, then to Dundee in Scotland for my master’s. I’d finished my Leaving Cert the year before but my mam wasn’t comfortable with my going at 17 so I took a year out and worked as a shop assistant before leaving the following year.

Describe your career so far, and your job now.

My career has always been in science but it’s been quite varied at times and I’ve travelled a lot. I started in the UK, then went to the Netherlands to do an internship at The Netherlands Forensic Institute in the Hague, then to Pristina, Kosovo to do an forensic anthropology internship with the United Nations (UN). After that I came back to Ireland and was lucky enough to get a job with a commercial archaeology company based in Galway for a few months until I once again left to work as an associate forensic expert with the UN in Beirut, Lebanon.

After that, in 2009, I moved back to Ireland to look for work but it wasn’t easy. There were no jobs and I basically spent nine months searching. I eventually decided to do another master’s to expand my skills, which I did in NUIG while living at home with my mam. This was a success and led me to apply to do my PhD in evolutionary anthropology at the Max Planck Institute for Evolutionary Anthropology in Leipzig, Germany, where I lived for more than three years. I then briefly moved to Brussels to do post-doctoral research at KU Leuven.

How does teaching in the UK at third level compare to Ireland, or other locations?

As I have never worked as a lecturer in Ireland I cannot compare. However, I find that UK and Irish academia have similar ethos and salary levels. I feel, from speaking with colleagues in Ireland, that attitudes may be a little more relaxed in the “publish or perish” academic realm, which I feel I would enjoy.

How does the education system generally compare to Ireland’s?

From being a student and a lecturer in the UK, and being a student in Germany, I think the Irish education system is one of the best in the world. I remember arriving as an 18-year-old to do my undergraduate degree in the UK and realising that I knew much more from my Leaving Cert chemistry than UK students who had taken multiple science subjects at A-level. In fact, I asked my mam to post me over my old Leaving Cert chemistry book as we were using the same one for my first year undergraduate degree.

After spending many years in non-English speaking countries, I was relieved to arrive in the UK, where I had lived before and where the attitudes to life are similar, but not exactly the same, to Ireland. I live with my fiancé, whom I met when living in Brussels, and who moved to the UK one year after me (he is French) after finding a good job here also. We have a good life here, with good friends and we are both happy with the work that we do; living here is very expensive though, we live 40 minutes outside London and rent is extremely expensive. The Brexit situation has also changed things for us as we now know that we have a deadline for leaving the UK (or we will have once Article 50 is invoked).

What are your future plans for the short and long-term?

Short-term plans are focused on our wedding in May. After that we hope to start a family. Our long-term plans are to leave the UK and look for work elsewhere. Ideally Ireland as I would like to move home and my fiancé would like to live in Ireland. Unfortunately while I think he wouldn’t have any difficulty finding a job in Ireland, I may struggle. as I said, there are not many opportunities for biological anthropology lecturers in Ireland.

If we are not successful in finding opportunities in Ireland, we will look farther afield to Canada perhaps, which is not ideal as I really would like any children we have to be educated in Ireland (and the older I get the more I want to come “home”) but the cost of housing and other issues such as Brexit means that staying in the south of England in the long term is not an option.

Do you think Irish academics like yourself would move back to Ireland? What would have to change? Or what incentives would have to be provided?

I think so! We have a lot to offer Ireland in my opinion. What would have to change, from my perspective in my field is the openness and the opportunity to include more diverse degree courses for Irish students. In terms of incentives, jobs with comparable salaries would be necessary for both myself and my fiancé to make it worthwhile moving to Ireland. Also, the rapid increase again in housing in Ireland may limit the places we can afford to move to.

From your experience working abroad, what suggestions would you have for the Irish education system?

In terms of primary and post-primary education I feel that Ireland is a world leader. In terms of third-level education, I feel there needs to be more diversity of choice in terms of programmes and courses offered. There should also be more outreach from industry, government and universities to post-primary students in terms of what is available in Ireland.