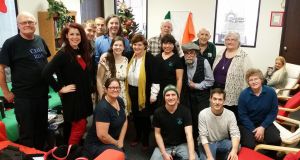 Síne Nic an Ailí (third from left, centre row), with members of Irish language and culture groups in Los Angeles at a Cultúr Club community-building workshop

Fluency in the Irish language has helped to take Síne Nic an Ailí (31) as far afield as China and the US. For the past 10 years, she has worked for Conradh na Gaeilge, an advocacy organisation that protects the rights of Irish speakers, and acts as a forum for the Irish-speaking community, with branches throughout Ireland and around the world.

In September 2014, she took 10 months out to teach Irish in the University of Montana in the US as a Fulbright foreign language teaching assistant.

Last year she travelled to China on the invitation of the Irish Consul to help establish Irish language and culture classes for children of the Irish diaspora in Hong Kong and Macau. That has now been developed into the Cultúr Club initiative, which aims to foster a stronger sense of Irish identity, especially among the Irish abroad, through everything from campaigns to classes.

Where are you from and did you grow up speaking Irish at home?

I was born in Dublin. However I spent time growing up in Westport as well as in both Galway and Belfast, before we moved back to Dublin when I was eight.

My mother, who is originally from Mayo, has some Irish but isn’t a fluent speaker so we didn’t speak Irish at home, rather I learned the language at school. I graduated with a first class honours BA in Irish Studies and Spanish ab initio from University of Limerick in 2007, and I started working with Conradh na Gaeilge in December of that year.

What is it like working for Conradh na Gaeilge?

It is challenging at times, but hugely rewarding. It has branches throughout Ireland and around the world with people who work hard to promote the use of Irish within their own communities, from Hong Kong to Canada, and from Carntogher to Cúil Aodha.

How did you get on the Fulbright programme?

Friends of mine had spent time as Fulbright Foreign Language Teaching Assistants, or FLTAs, and had had some incredible experiences in the States as part of the programme. I felt that it would greatly benefit my work with Conradh na Gaeilge to better understand how and why people abroad were learning Irish.

Conradh na Gaeilge recognised the wider benefits for myself and for the organisation, and gave me a career break of 11 months to teach Irish as an FLTA in the University of Montana in America in 2014/15

Did you enjoy teaching Irish in the US?

As someone who is more inclined to bop along to the latest pop song or strike a yoga pose than play GAA or sing a traditional Irish ballad, I was suddenly very conscious of what defined me as an Irish person, so far from home. The Irish language has always been that grounding link to my sense of Irishness and it eased me into my role as a cultural ambassador for Ireland in America.

What did you learn from your time abroad?

I realised just how heightened and important that connection to Ireland and that sense of Irishness can be to the Irish diaspora. The positivity and prosperity that the language has brought me has always inspired me to give others the chance to experience Irish in the same way, and my work promoting the language with Conradh na Gaeilge took a more international turn following my Fulbright experience.

What is the new Cultúr Club initiative?

This is a collective title for a variety of initiatives being developed by Conradh na Gaeilge to help foster a stronger sense of Irish identity through the language, especially among the Irish abroad. These initiatives aim to assist local communities in everything from running language rights campaigns to organising cultural events for all age groups, through Irish.

Tell us how it came about?

Cultúr Club began with an invitation from the Consulate General of Ireland for Hong Kong and Macau for myself and a colleague to travel to China last summer to help establish Irish language and culture classes for children of the diaspora there. Thanks to funding from the Department of Arts, Heritage, Regional, Rural & Gaeltacht Affairs and the Fulbright Commission of Ireland, it has since developed to include a series of community-building workshops across the US.

What did you learn from the experience in Hong Kong and Macau?

It gave us great insight into how important it is for us at home in Ireland to support the Irish diaspora in cultivating their Irish identity abroad through the Irish language and culture, and how we might best go about providing this support in practical, tangible ways.

How is it being expanded in the U

We consulted with Irish language and culture groups and then worked with them to run information sessions to share advice and experience with other grassroots groups on issues including education, publicity, lobbying and funding. We also discussed ideas for social events through Irish, and talked about the importance of action plans to strengthen and consolidate the local language community.

What is Cultúr Club trying to achieve?

The aim of the Cultúr Club initiative is to strengthen and support the international Irish-speaking community. The communities I have met are shining examples of an Irish identity can be fostered when you have the right people involved and a grá for all things Irish, whether modern or more traditional.

How can it help Irish people living abroad?

The workshops in the US gave me a wonderful opportunity to see first-hand the selfless work being done by individuals and groups to cultivate the Irish language and culture abroad. But the workshops also highlighted the challenges faced by community groups trying to foster a sense of Irishness without access to the resources and teachers we take for granted in Ireland. We owe it to our best exports to encourage and support them in their efforts to create a new, internationally-informed sense of Irishness abroad.

Síne Nic an Ailí is a former Fulbright foreign language teaching assistant who works as a communications executive with Conradh na Gaeilge. You can get information on Cultúr Club at cnag.ie/culturclub or order a support package from culturclub@cnag.ie.