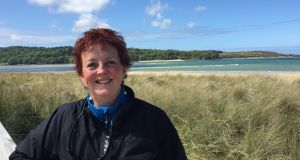 Grace Gerry: ‘Liam Neeson once said he missed Ireland most when he was there. I know what he means’

Last spring I left Canada to return to Donegal for four months to answer the question: where is home and where do I belong?

Even though it had been 30 years since I left, I still think of Ireland as home. But Canada is also home, and since I became a Canadian citizen and have two passports, I have felt torn between two lovers. I hoped this visit would settle the question of my true love.

I was curious and excited. I knew what it was like to go home for a two-week binge of family and friends, bookended by the joy of arrival and the pain of departure. But this time was different; I had time to explore.

Liam Neeson once said he missed Ireland most when he was there. I know what he means. I too appreciate the ordinary pleasures and delights that locals might take for granted, like the familiar ring of the Donegal accent. I love the novelty of going for a spontaneous coffee or lunch with old friends, simple pleasures not possible when you live on another continent.

I drank in the rhythms of Donegal, the damp Atlantic air, the inky blue hills, the jokes, the laughs and the endless cups of tea. As I slowed down and settled in, an unexpected joy stole over me, and my bones relaxed.

I had forgotten how connected the community in Donegal was, even though I had grown up in a family pub where locals gathered. It surprised me every time I met someone new.

The first thing they asked was who I was and who my family were. Once satisfied they could pinpoint me on their community map, they’d say “Sure I knew your mother and father well”, “Isn’t it your sister who plays the golf?” or “Ah sure everybody knows your brother”. It was both unnerving and endearing, that I still belonged no matter how far I’d travelled, or how long I’d been gone.

It was this kind of connection that inspired me to build a community on Vancouver Island in Canada where I now live. I previously wrote for Irish Times Abroad about a popular “soup for neighbours” event my husband and I have hosted at our house every December for the past 12 years, which 40 or more attend.

Although I had hoped events like this would create the kind of community I grew up in, it’s not the same. I know 100 of my neighbours by name, but people are reserved. While they help out if asked, it is rare we are invited into a neighbour’s house.

I had forgotten too how friendly Donegal is, even to strangers

In contrast, my family is part of our Donegal community for generations. In times of trouble, the power and depth of that community emerges. When my 90-year-old aunt died a few years ago, friends and neighbours took over our kitchen for the two days of her wake, and made sandwiches, tea and cake for the hundreds who visited to pay their respects.

I had forgotten too how friendly Donegal is, even to strangers. When I ran out of petrol, a man gave me a lift to my car and helped fill it up. When my Canadian bank card wouldn’t work in a supermarket, a cashier I’d never met offered to pay the €1.50 for my yogurt out of her own money.

And when I needed a piano to practice on, a hotel manager offered one any time the room was free, all with the ubiquitous Donegal phrase, “no bother”.

But I also missed aspects of Victoria. I longed for sunny summers I had taken for granted, when faced with the soggy days of July. I missed picking strawberries and raspberries for breakfast from our back garden, and wondered why more people didn’t grow fruit and vegetables in Donegal. I missed the convenience of seeing my doctor without having to pay.

It felt strange to discover I had to assimilate to the way things were done in Ireland, even though I had grown up there. When my sister said “You’d never say that or do that here”, I felt like a tourist.

But I discovered what people thought didn’t seem to matter anymore. I felt immune. Having lived in other cultures for 30 years, I was finally free to be myself.

I returned to Canada in late July, eager to leave the rain behind and enjoy the sunny summer in Victoria. I looked forward to eating berries from the garden and was grateful for the 600lb of produce my husband had harvested, much of it in the freezer for the winter.

As I stepped back into the familiar patterns of my life in Canada, the question remained: where is home, and where do I belong?

My time in Donegal was both satisfying and unsettling and made me curious for more. I decided to come back again this spring with my Canadian husband, spend a year in Ireland and see how that feels.

There may not be an easy answer to my question. But I need to find out.

A version of this article was first published in ‘Women’s Lives’, a weekly feature submitted by the Donegal Women’s Network (NCCWN) to the Donegal Democrat.

Nigella Lawson: ‘I feel insecure if I don’t know what I’m going to eat’
Real news has value SUBSCRIBE