‘São Paulo is a city of the night ... I bring people to one of the amazing clubs or parties’ 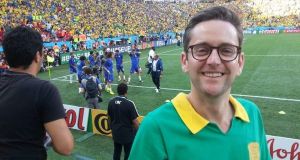 From Carlow, Joe Morgan moved to São Paulo in Brazil five years ago. He currently works in Microsoft as their Sales Operations Lead.

Where is the first place you always bring people to when they arrive in São Paulo?

São Paulo is a city of the night. I bring people for a cocktail on the main shopping street (Rua Oscar Freire) followed by a evening in any one of the amazing clubs and parties that take place every night of the week. If we have a little more time, the north coast of São Paulo is a hidden gem where only the Brazilians holiday. Incredible beaches where the lesser-known Atlantic rainforest runs right out to the sand are only a three-hour drive from the city centre. Camburi, Juquehy and Isla Bela are good places to start. Bring your translator - you won’t find many English speakers.

The top three things to do there, that don’t cost money are...

Take a Sunday walk on the main avenue (Paulista) when it is entirely closed to traffic and taken over by bands, artists, people selling beers and the old, and young enjoying a great temporary city park.

Head to the top of the Banespa building downtown and take in the awesome sight of the largest city in the southern hemisphere.

People-watching in the busy but energising Ibirapuera park is a must.

Where do you recommend for a great meal that gives a flavour of São Paulo?

Jiquitaia is a great restaurant serving a tasty interpretation of Brazil’s north-eastern cuisine - great fish stews, baiao do dois (bowl of rice, beans, dried beef and a nice soft egg on top) and lots of other tasty dishes. The traditional feijoada is an acquired taste and includes pig’s tail, ear and other choice bits. But like a good pint of Guinness, once you get it, you’re hooked!

Where are the best places to get a sense of São Paulo’s place in history?

Downtown São Paulo is gritty but exciting affair. Take a walk around the teatro municipal, martinelli building, china town and some beautiful old cathedrals. Escape the craziness with lunch in the very elegant rooftop restaurant Esther.

What should visitors save room in their suitcase for after a visit to Sao Paulo?

Havaiana flip-flops are the traditional choice. A nice bottle of cachaça to make your own caipirinhas on your return will be important - you’ll get a taste for the lemony sweet drinks on the beaches of São Paulo state.