Cleanup has begun in Montreal after spring flooding, which points to climate change 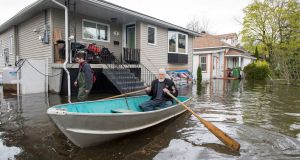 In Quebec, where I live, the winegrowers association has confirmed a strong warming trend underway since 1982. The number of frost free days has increased from 135 to 182, which has been a boon for vineyards and wineries.

Although I only learned of this statistic recently, I have noticed over the past ten years how summery days had begun to linger on to the end of September, then becaming commonplace in October. By last year early November was warm enough for me to do Tai Chi in the park in a t-shirt and bermudas.

This winter was mild with daily temperatures oscillating around the freezing mark. There were no -20C days or nights. It seemed a dream come true -- a summer stretching into early November followed by a mild winter.

This mild winter wasn’t as inoffensive as it seemed, however: it lead to major spring flooding in Montreal.

The mild winter brought many dreary days of grey skies and rain; it reminded me of winters back home.

The unseasonal rainfall led to increased water levels in Quebec’s lakes and rivers. As the winter drew to an end, melting snow drove up the levels even more.

On Easter Monday I stopped in the village of Saint Placide on the Lake of Two Mountains, close to Montreal. At the lakeshore a strong wind was driving three feet high waves against the rocks. Some anglers said they had never seen the lake so high and so agitated. I said the lake was like a sea.

In mid April, the municipality of Rigaud, also on the Lake of Two Mountains, began to flood. It made the news but didn’t raise any alarms about more widespread flooding.

On May 1st though, la rivière des Prairies burst its banks and some west end suburbs started to flood. The flooding didn’t stop at Montreal. It spread to the Gatineau region, close to Ottawa.

The water rose very quickly: a week after it began 175 Quebec municipalities were on flood watch, more than 4,000 homes are evacuated, the army was deployed and Montreal declared a state of emergency.

This was shaping up to be Quebec’s worst natural disaster since the ice storm of 1998.

Anatomy of a flood

Managing water levels around Montreal is a complex business since waterways are a Federal responsibility, hydroelectric dams are provincial and Lake Ontario is a Canada-US responsibility.

Coordinating these levels of government with the army, provincial, municipal and city emergency services is far from simple, especially when events are unfolding so fast.

It was normal that some mistakes were made, but emotions were running as high as the flood water and soon the recriminations had begun.

How come the authorities weren’t better prepared? Didn’t the experts see the water levels rising? Why did no one react after Rigaud flooded? Weren’t lessons learnt from recent floods in Calgary, and Manitoba? Why were homes built in known flood zones?

A local hero -- German-Canadian Eva Cohen -- a volunteer on sandbag duty stepped forward with some helpful suggestions for preparedness.

Interviewed on the radio, and then on TV, she explained the workings of the German Federal Agency for Technical Relief that can call on 50,000 emergency relief volunteers trained in all technical aspects of disaster relief.

A lot of Montrealers called in wanting to know why we don’t have something similar.

Another problem is that Canada is the only G8 country where “overland flood” insurance coverage is not available because, as insurance companies claim, governments are not updating maps.

Therefore flood victims must turn to government relief - that is adequate, but not full, coverage for losses.

The clean-up has begun in recent days, and teams of social workers are calling door to door to see how flood victims are coping.

Canadian homes often flood through small cracks in basement walls and windows. A basement can flood even though there may be only ten centimetres of water outside. Therefore, homeowners must keep pumps running constantly to keep the basement from filling up. Many homeowners, after weeks of manning the pumps, are sleep deprived.

Nonetheless, one tired homeowner did manage a smile as he looked at the ducks who’d taken over his flooded back garden. As to the goldfish that once swam in his ornamental pond he said he had no idea where they might be.

The April rainfall that led to the flooding was caused by a storm system “stalled out” or trapped directly overhead by the Jet Stream whose path, once predicable, has become extremely erratic. All of these symptoms point to climate change.

I’m not suggesting other prospective migrants should try to factor climate change effect in deciding on a destination. What does make sense, and is doable, is checking the emergency response record of the authorities there.

In the case of flooding, for instance, how the authorities respond is important for you. In the figurative sense you don’t want them to leave you high and dry. In the literal sense, though, you do.