March for Our Lives: Young people are screaming to get voices heard on guns 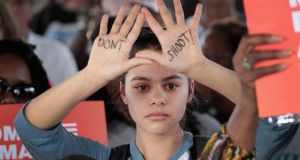 Demonstrators participate in a March for Our Lives rally on Saturday in Killeen, Texas. More than 800 March for Our Lives events, organised by survivors of the Parkland, Florida school shooting that left 17 dead, took place around the world to call for legislative action to address school safety and gun violence. Photograph: Scott Olson/Getty Images 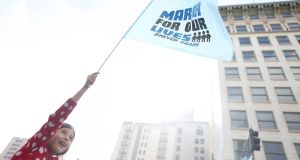 When my daughter was three, she came home from school with a note in her backpack telling us there had been a school-shooter drill that day. I didn’t know about this drill in advance, I was told after the fact. My blood turned cold as I read the piece of paper that explained to me how my baby was being prepared for my worst nightmare. When I asked her about it, she told me they had to hide in the bathroom and stay very quiet so the bad man wouldn’t find them.

America is failing its children. On Saturday, marches took place across the United States in an effort to force lawmakers to protect kids from gun violence. The teenagers who organised the event should not have had to do this. They should be at home, hanging out with their friends, doing teenager stuff, but they can’t do that anymore because children in schools in America are in grave danger.

This country has an empathy problem. When young children were shot to death at an elementary school in Newtown, Connecticut, (the Sandy Hook massacre) and nothing was done, the fight to control guns in this country was lost.

After the horrific shooting at a high school in Parkland, Florida, kids who should have been grieving took hold of the moment and turned it into a call to action. They took what was a lost cause and brought it back to life.

There is no other country in the world where this happens. There is no place that I can think of where adults grip so tightly onto a constitutional amendment and give it more value than that of a child’s life. Lawmakers and voters who extoll Christian values and morals about an unborn child do more to control sentient women’s bodies than they do to protect living, breathing children out in the world.

The thoughts and prayers jig is up. These kids have got our number and they are not stopping. Unlike those who cling to their guns or the Second Amendment, they want all of America’s children to live full and free lives. They have already stared death in the face, they have already known a fear no child or adult should ever know. And on Saturday, they took to the streets, with an estimated nearly one million people, to make their voices heard. Across the country, their voices echoed as thousands more marched, screaming to be heard.

I’ve thought long and hard every time another mass shooting happens about the root cause of the attachment to guns in the United States. I’ve listened to people who would give up their lives to protect the Second Amendment. I have tried, but I cannot understand this love for guns.

I was not born in the US and though I have spent a quarter of my life here, it is clear to me that I will never truly know what it feels like to be American. I will never understand what it feels like to have a deep-rooted attachment to the rights bestowed upon (some, not all) Americans from birth. But as an Irish woman, I do know a thing or two about history and identity and how they intertwine.

The grown-ups in America have failed, time and time again, to protect children. Every day that passes where stricter gun-laws are not in place is a day closer to the next massacre. The NRA has more than blood on its hands. It has the stench of greed looming all around it. They are in the business of guns and they have made it abundantly clear that guns are more important than human lives.

The message this weekend was clear: your rights as a gun-owner do not supersede my right to life. That is not how a real democracy works. Real patriotism recognises the rights of all citizens, not a selection of the population. You can’t pick and choose which parts of being a patriot suit you. This isn’t a la carte America.

The children of this country are in pain. They are living in fear. Terror, home grown abject terror, can strike at any time. There is no pattern, no predictor, only a common denominator: guns. They are a scourge on this land and they are affecting the generation of young people set to take over this mess in the next few decades. Guns are changing how children take part in the world. The lack of action to stop this is causing at best undue stress and at worst, death.

Every year, every school child in America has to practice, multiple times, how to protect themselves from someone who has come into their school to murder them with an assault weapon. The kids leading the March For Our Lives are well practiced at this. They’ve been doing it for years. This is the reality of being a child in America. And it makes my blood turn cold.