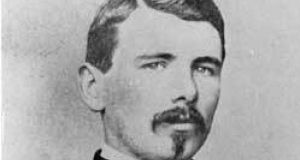 Myles Walter Keogh was a restless spirit who often found himself in the vanguard of history. During his all too short life, he would make the Vatican his home, come within a hair’s breadth of capturing the Confederate general Thomas ‘Stonewall’ Jackson in battle, and make a last stand alongside ‘General’ Custer, at the ill-fated Battle of the Little Bighorn.

Born in 1840 on the periphery of the small village of Leighlinbridge in Co Carlow, to a large but successful farming family, he was one of 12 siblings. He had been expected to marry well and become a prosperous farmer in his own right. Yet Myles had other ideas. His energetic nature and need for adventure meant he would never be content with a sedentary lifestyle, at least while a young man.

His first opportunity to escape the monotony of rural life came in 1860 when the embattled Pope Pius IX sent out a plea to all Catholics to come to the defence of the Papal States, and preserve the Pope’s temporal holdings against the forces of Garibaldi and the House of Savoy, who sought to unify the Italian peninsula. The call roused the sympathies of the Catholic laity in Ireland and across Europe, and hefty donations and eager recruits were quickly dispatched to Rome to defend “the Holy Father” from his enemies.

He was the only Irish officer to take part in the Battle of the Little Bighorn and apparently one of the last to fall.

Alongside 1,400 other Irishmen, Keogh soon found himself in Italy as a member of the Papal Army’s Battalion of Saint Patrick. He was commissioned as a Second Lieutenant and posted to the city of Ancona after only three weeks of training.

But the reality of his position was not as glamorous as he might have expected. The uniforms the Irish volunteers received were Austrian army cast offs, while their firearms consisted of obsolete muskets. Despite this, both he and his fellow countrymen were praised by their commanders and fought tenaciously in every engagement and put up a spirited defence of their positions.

The Papal Army as a whole, though, was no match for its nationalist opponents, and quickly folded after a short, lacklustre campaign which ended after just 18 days. Keogh was taken prisoner but soon released.

As a measure of the esteem he was held in, he became one of only 50 Irish veterans to be selected to join the Papal bodyguard’s newly created Company of St Patrick (complete with bespoke green uniforms), and was awarded both the Pro Petri Sede medal for Gallantry, and made a Knight of the Order of St Gregory the Great.

Yet the life of a ceremonial bodyguard proved far too tedious for Keogh, and with the American Civil War now underway, he and his fellow officers soon obtained commissions in the vastly expanded Union Army.

Now a captain, he was attached to the army of Brigadier General James Shields, and despatched to the Shenandoah Valley. His bravery was frequently reported on and, during the earliest stages of the battle of Port Republic, his mounted patrol came across the staff of General ‘Stonewall’ Jackson holed up within the town.

Luckily for the general, his horse was saddled nearby and he was able to make his escape, though many of his senior officers weren’t so fortunate and were taken prisoner.

Keogh was then made a staff officer under Brigadier General John Buford, a cavalry commander with whom he formed a close bond, and who affectionately referred to his Irish officers as “dashing, gallant and daring soldiers”.

After serving in both the Fredericksburg and Chancellorsville campaigns, Captain Keogh would take part in the largest cavalry engagement ever to take place on US soil, the Battle of Brandy Station, before following Buford to Gettysburg, where he earned a titular promotion to Major for his “gallant and meritorious service”.

Captured in 1864 following an attempt to free Union prisoners from Macon, Georgia, he would spend two- and-a-half months in captivity before his release. A second titular promotion followed the Battle of Dallas, and he ended the war as Brevet Lieutenant Colonel.

The victorious US army was vastly reduced, but Keogh managed to secure a captaincy in the 7th Cavalry Regiment under the command of the controversial Lt. Colonel George Armstrong Custer.

He was the only Irish officer to take part in the Battle of the Little Bighorn and apparently one of the last to fall.

He was one of 34 Irish soldiers who died that day. His body was also one of the few that wasn’t mutilated, reputedly because of the papal medals he still wore.

His horse, Comanche, was the only injured animal the rescue party spared, and after he was nursed back to health, was adopted as the regimental mascot of the 7th Cavalry.

Keogh’s eventful life was one cut sadly short by circumstance and ill fate, but still a fascinating one that provides rare insight into the life of a 19th century Irish emigrant soldier.

This Extraordinary Emigrants article was written by Nathan Mannion, senior curator of Epic The Irish Emigration Museum in Dublin’s Docklands, an interactive museum that tells the story of how the Irish shaped and influenced the world.