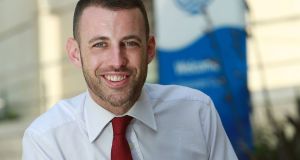 I left Dublin in September 2007 to go to the Berkshire town of Reading, and complete my final two years of university in London. Before the days of Skype, FaceTime and Whatsapp, a life across the pond made me feel like a fish out of water. At 23 years of age, I felt I was leaving my whole life as I knew it behind.

After a month or so over there, I met a girl from Waterford who came into the shop where I was working as a sales assistant to buy something. I didn’t let her go for want of tales of what she thought of England from an Irish perspective. I think I freaked her out, but I was just so delighted to see other Irish people in the town.

Reading has a few Irish success stories: it’s the Primark headquarters, it’s where Oscar Wilde was imprisoned, and it was home to Shane Long and many other Irish footballers before they moved on to other places. I was determined to be another quality Irish export.

For two years I worked and studied while mum and dad very kindly paid my rent, but I remember not having enough money for food on the run up to pay days. Memories like these stay with you for some time.

Between 2008 and 2010, everyone at home kept telling me I was “the lucky one” who had got out before things got bad. In 2009 I finished my degree, and I was delighted to be qualified to earn more money. Over the years I picked up some brilliant experience working in marketing and communications for big companies in London. I was never out of work, and being Irish was a huge benefit.

But as the years passed, I came to the realisation that I didn’t want to settle permanently in England, or move even further away from home. I spoke with my closest friends and the family, and eventually decided to prioritise my personal life over my professional one.

So in November, I moved back home after eight years in the UK. It was a huge decision for me and took a lot of emotional effort. I sacrificed a good job, financial security and friends to come back. It’s been great seeing everyone on a more regular basis but it hasn’t been easy.

If I were able to speak directly to the Minister for the Diaspora Jimmy Deenihan, I would tell him about the following obstacles I have had to overcome on returning to Ireland:

1. It took three weeks to get a note from the tax office with my PPS number on it

2. As a consequence, it has taken four weeks to set up a bank account (I’m still drawing down Sterling)

3. I can’t get a phone until I have a bank account

4. I don’t have a credit rating in Ireland (so I’ll hold onto my UK credit cards for now)

5. Five job interviews later and I still haven’t been able to secure a job (but I’m staying positive)

But despite all this, I’m glad to be back. I just wish those #HomeToWork adverts would include some warnings about what it’s really like back in Ireland right now.