The Irishwoman who was the world’s first female stockbroker 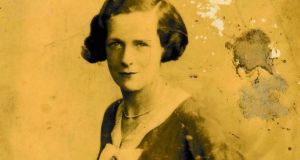 At the confluence of the Adour and the Nive rivers lies the ancient city of Bayonne. A mere 9km from the luxurious seaside resort of Biarritz, it is a region that has long attracted the well-to-do of Europe to its grand hotels, casinos and exclusive beaches. Just under a hundred years ago it was home to a young Irish women who had come to France to gain fluency in the language. Using the city as a base she spent over two years travelling across Europe and North Africa, journeying from the Moroccan Maghreb to the Dalmatian coast of Croatia.

Her name was Oonah Mary Irene Keogh, the daughter of one of Ireland’s most successful stockbrokers. Her absence from Ireland during this period was fortuitously timed, as civil war raged in the newly independent Irish Free State and its future remained somewhat uncertain.

She moved to London in 1924 following the end of her Mediterranean tour, where she briefly studied and developed a deep interest in politics. However, in 1925 she returned to the fledgling Irish state and made history when on May 4th, 1925 she lodged an application to become a full member of the Dublin Stock Exchange, the first woman ever to do so. Her application was a cause for heated debate among the existing members and in some respects these discussions mirrored many others taking place at the time regarding the role women should play within Irish society. The barriers to entry were formidable. Not only did you have to pay an application fee of more than 500 pounds, hold securities of more than 2,000d pounds and cover a hefty annual subscription, but you also needed references from other wealthy and influential individuals. Keogh’s included then Minister of Agriculture Patrick Hogan and her father Joseph.

Yet surprisingly, after three weeks of debate, the membership committee approved her application. This was revolutionary and came more than 50 years before the New York or London Stock Exchanges could boast their own fully accredited female stockbrokers. Interestingly Keogh also received one of the first Irish language stockbroker licenses issued by Saorstát na hÉireann (The Irish Free State). Her apprenticeship at the exchange was cut short when her father, whose firm she was affiliated to, fell ill only six months after she took up her position there. She was compelled to take his place and began trading and dealing on his behalf, despite her relative inexperience. At just 23 years of age she was now responsible for handling some of the largest financial transactions in the state, but it was a task she proved more than capable of. However, on her father’s return they quarrelled over the management of the firm and though Keogh would remain with Joseph Keogh & Co until 1933, they grew increasingly distant and estranged. Another disadvantage that heighted her growing sense of alienation was her inability to partake in many of the social events the male members frequently participated in. Golfing trips, drinks at the gentleman’s clubs and even gender segregation at race meetings meant that many of the most important deals were made without her.

Instead she began to spend more time away from Dublin, mostly in England, where she would eventually meet her future husband, a Russian exile named Bayan Giltsoff. They later settled in Kilquade, Co. Wicklow and the farmhouse they renovated, despite its Tudor inspiration, found many imitators. The new settlement was soon christened as the Old Russian Village in honour of the couple, a name it still retains. Keogh would later also live in Spain and eventually passed away in 1988. She will always hold the distinction of being the first female stockbroker in the world and though her achievement was made possible through the financial support of father she nevertheless proved herself his equal and did so despite a number of barriers that her male contemporaries never had to deal with. Her time at the Dublin Stock Exchange also attracted a lot of international media coverage for the fledgling Irish nation and presented it in a far more favourable light than it perhaps merited. She remains an inspirational figure for the ambitious women determined to make their mark in male dominated fields across the world.

Keogh's life is one of six featured in Herstory, a six-part documentary series starting on RTÉ One from Monday, February 3rd.