Why I’m flying home from New York to vote Yes

For many gay emigrants like me, our future in Ireland depends on how Ireland votes on Friday 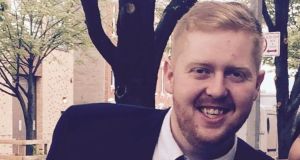 James Kelly: ‘I don’t want to live in a country where I am considered less than equal and less of a person than my friends and siblings, in the eyes of the law, and the eyes of the public.’

When I lived in New York four years ago I was lucky enough to have been in Manhattan the day marriage equality was passed. The outpouring of pure happiness and love that day will stay with me forever, as a community of people once reviled by society could confidently and openly declare their love as equal to any heterosexual couple’s.

It was a momentous day for New York, the culmination of years of hard work fighting for acceptance. Ireland is now facing this same decision, and I have flown home to help ensure Ireland can experience this same day of love and acceptance this weekend.

I left Dublin late last year with only great regret, that I would miss the same-sex marriage referendum campaign. Having given hours upon hours of my life to the ‘MarriagEquality’ organisation over the years, I would be missing the most crucial time. But the career opportunity on offer in New York was a once-in-a-lifetime chance that I needed to take.

As the referendum came to dominate public discourse at home this year, I was in some ways relieved to not be at the coalface of a campaign where the private lives of people have been put on display. For a group that has been for so long marginalised by society, 2015 has been a draining time for LGBTQ people, as they have been forced to step into the spotlight and bare their souls for public scrutiny.

The amazing outpouring of support from fellow recent emigrants for marriage equality is incredibly heartening, and incredibly frustrating. About 250,000 Irish people have left Ireland since 2008, 70 per cent of them in their 20s. If these young emigrants are anything like those who stayed behind, the vast majority support marriage equality (about nine in ten 18-35-year-olds are in favour, according to a recent poll).

Now they find themselves disenfranchised in the most important vote in our living memory because they can’t afford to come home, or they are outside the 18-month voting eligibility period.

The work done by the likes of the We’re Coming Back and Get the Boat to Vote campaigns has highlighted the inequality of denying Irish living abroad their say in how the future of Ireland will look.

This referendum doesn’t affect people in the abstract; for many people like me, our future in Ireland is dependent on how Ireland votes on Friday. I don’t want to live in a country where I am considered less than equal and less of a person than my friends and siblings, in the eyes of the law, and the eyes of the public.

But we are the lucky ones, the ones who can decide to live abroad. The crushing disappointment of a potential No may be mitigated slightly for me upon my return to New York, as I don’t need to live each day in a country where I’m not accepted. The damage a No result will inflict on LGBTQ people - especially children and teens - still living in Ireland is unfathomable.

I am proud to be returning home to the country I love for this vote. There was never any option in my mind but to return for it, and I am blessed I could make the sacrifices to get back, when I know so many others who would love to but cannot.

This referendum is about more than just two loving same-sex partners being allowed to marry. It is about defining for our generation, and generations to come, an Ireland where we accept and cherish all of our children. That is why I am coming home to vote - to be a part of the moment, like I was in New York four years ago.